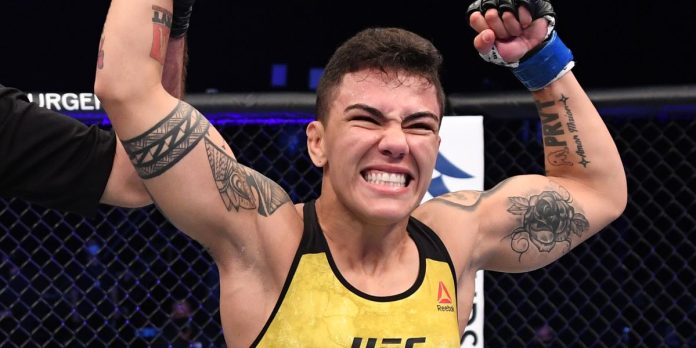 Ahead of her return to strawweight at UFC Vegas 52, Jessica Andrade has stated that the level of competition in the 115 pound division is much tougher compared to flyweight.

Andrade is currently on a two-fight losing skid at strawweight. She lost her 115 pound title to Zhang Weili by first round knockout at UFC Shenzen, before dropping a razor close split decision in her rematch against Rose Namajunas at UFC 251, after which she moved up to flyweight, where she made an impressive start by finishing Katlyn Chookagian in the first round at UFC Fight Island 6.

‘Bate Estaca’ then challenged Valentina Shevchenko for the flyweight title at UFC 261, where she was finished in the second round. She returned to winning ways with a dominant first round finish of Cynthia Calvillo at UFC 261, and will now return to strawweight this weekend in the UFC Vegas 52 main event to face Amanda Lemos, who is currently riding a five-fight winning streak, with her most recent victory coming against Angela Hill at UFC Vegas 45.

Jessica Andrade On Strawweight vs Flyweight

During the UFC Vegas 52 media day (as transcribed by BJPenn.com), Andrade said that the strawweight division is much tougher than the flyweight division.

“I wouldn’t say I have a quicker path to a title shot, because I was already number one at flyweight,” Andrade said. “But, it’s a much tougher division overall. I think the level of competition at strawweight is still quite ahead of the flyweight division. But at the end of the day, I’m a strawweight. I’m going to perform my best at strawweight, I can do well at flyweight, and I can probably still do well at bantamweight. But strawweight is my optimum weight.”

Will Jessica Andrade make a successful return to strawweight by beating Amanda Lemos this weekend at UFC Vegas 52?