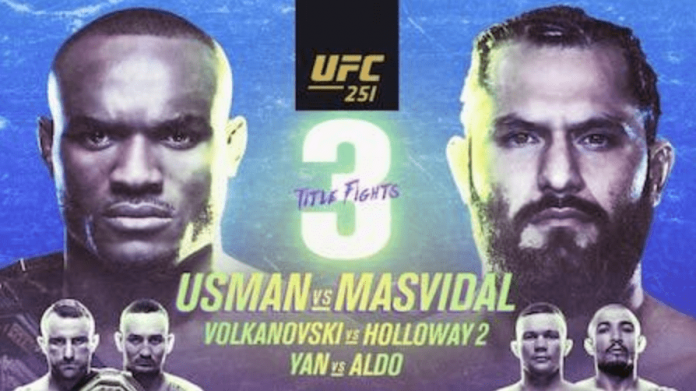 The UFC landed on Fight Island on Saturday with UFC 251. Going down on Yas Island in Abu Dhabi, the stacked card featured three title fights. In the main event, Jorge Masvidal had came in on one week’s notice, after Gilbert Burns was removed from the card due to testing positive for the coronavirus, but was unable to dethrone Kamaru Usman. After five rounds, ‘The Nigerian Nightmare’ was awarded the win via unanimous decision.

In the UFC 251 co-main event, Alex Volkanovski also defended his title. After winning the title against Max Holloway at the end of last year at UFC 245, the Australian again won via decision, this time by split decision.

In the third title fight of the card, Petr Yan secured the vacant bantamweight title by defeating the former featherweight champion, Jose Aldo. The Russian turned up the heat in the third round and after some brutal ground and pound, the referee finally stepped in and stopped the fight.