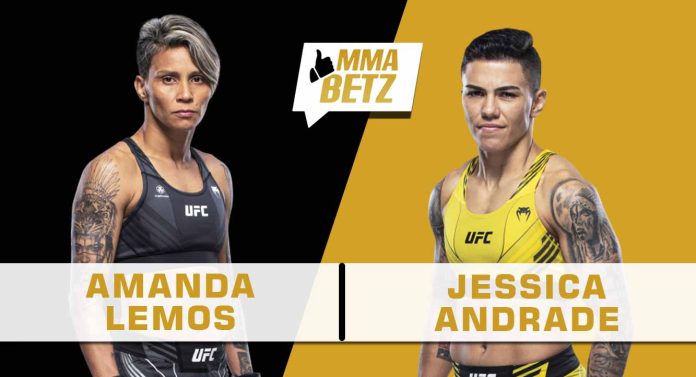 UFC Vegas 52 goes down this weekend at the UFC APEX in Las Vegas. In the main event, rising star Amanda Lemos welcomes back former champ Jessica Andrade to the strawweight division.

Lemos is currently riding a five-fight winning streak, with her most recent win coming against Angela Hill by a razor close split decision at UFC Vegas 45, whereas Andrade returned to winning ways by stopping Cynthia Calvillo in the first round in September last year at UFC 266, a few months after failing to capture the flyweight title against Valentina Shevchenko at UFC 261.

Andrade is a wrecking ball, who uses her strength and power to bully her opponents. She is the hardest hitting strawweight in the world right now. Lemos is a striking specialist in her own right. She has crisp striking and combinations and manages distance really well, especially against shorter opponents. She is also very lethal in the pocket and has incredible power in her fists. Andrade vs Lemos is going to be a firefight, whichever way it goes.

Although Andrade is 2-3 in her last five fights, her losses have come at the hands of some of the best pound-for-pound women’s fighters on the planet. She has fought better competition than Lemos. ‘Bate Estaca’ also has a lot more experience and is still very much in her prime. Lemos doesn’t have big names on her resume, but with three first round finishes in her last five fights, she deserves a lot of respect.

Make no mistake about it, Amanda Lemos is a very accurate striker and can catch Andrade on the counter while she’s charging at her with reckless abandon. Overall, however, Andrade has more ways of winning the fight and will get her hand raised on the night.

Who do you think will win the strawweight fight between Amanda Lemos and Jessica Andrade at UFC Vegas 52?