Nate Diaz has hit out at Jake and Logan Paul for cherry picking wrestlers for boxing fights and deliberately avoiding ‘real fighters’.

Diaz was in attendance for Jake’s boxing rematch this past weekend against Tyron Woodley, which the YouTuber won by a vicious sixth round knockout. While the Stockton native couldn’t get his hands on ‘The Problem Child’ because of his beefed up security, he still made headlines when a clip of him throwing a fake punch at MMA fighter Carrese Archer, who flinched and spilled his beer in the crowd, went viral.

Having failed to confront the Paul brothers face-to-face at Paul vs Woodley 2, Diaz took to Instagram and slammed them for cherry picking wrestlers to improve their boxing record, and avoiding ‘real fighters’ like him.

“The Paul sisters hired this security team to make sure I wouldn’t get to them, like I was actually trying too, but it’s all good with you guys. I don’t take this fight thang with you two serious. You guys playing boxing with wrestlers who can’t box or lil ass Floyd and that’s not cool bruh but it’s good. I’m a real fighter from the real fight game so don’t trip so hard when you see me fellas let’s just be friends it’s good,” Diaz wrote on Instagram.

With one fight left on his UFC contract, Diaz is close to becoming a free agent and could look at new avenues, which only adds to the speculation of a future boxing showdown between him and Jake.

Diaz hasn’t fought since losing to Leon Edwards by unanimous decision in the first non-title, non-main event, five round fight in UFC history at UFC 263.

Who do you think would win a potential boxing match between Nate Diaz and Jake Paul? 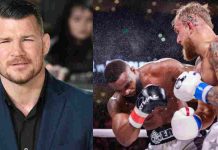