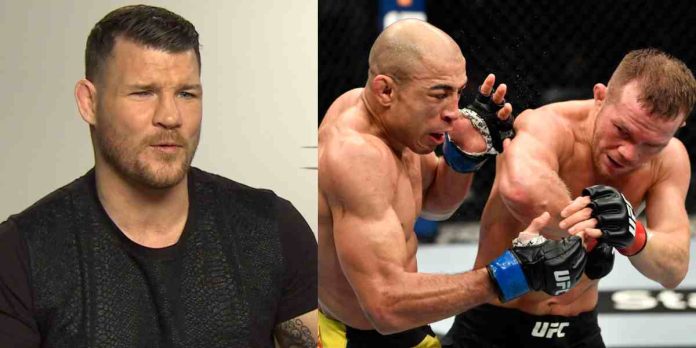 Michael Bisping has given his thoughts on a potential rematch between Jose Aldo and UFC interim bantamweight champion, Petr Yan.

Aldo fought Yan for the vacant title at UFC 251, where he was finished in the fifth round in a rather one-sided fight. Since then, the former featherweight king has won three consecutive fights, with his most recent victory coming against Rob Font this past weekend at UFC Vegas 44. The win has put the ‘King of Rio’ in a strong position to once again fight for the 135-pound title, currently held by Aljamain Sterling.

Yan will most likely face Sterling in a title unification bout next, while Aldo is campaigning for a title eliminator against TJ Dillashaw. Should the Russian and the Brazilian lock horns again down the road, Bisping believes it would be a different fight.

Speaking on his YouTube channel, Bisping said that Aldo can beat Yan in a potential rematch.

“He’s trying to become the bantamweight champion,” Bisping said. “It is a passion that burns brightly within him to be the bantamweight champion and what a story that would be. Now we know, he fought Petr Yan for the belt last year on Fight Island, didn’t go his way, got stopped in the fifth round in a relatively one-sided performance but still, bad night at the office. Every fight is different. Remember, I fought Luke Rockhold the first time and I lost. The second time I fought I beat him, knocked him out in the first round. So there’s no reason that Jose Aldo couldn’t beat him in a rematch and that’s what he wants. Before he retires, he wants to lay claim to being the bantamweight champion of the world. Two-division champion, defended the belt many times… he would go down literally as one the greatest of all time and rightly so.”