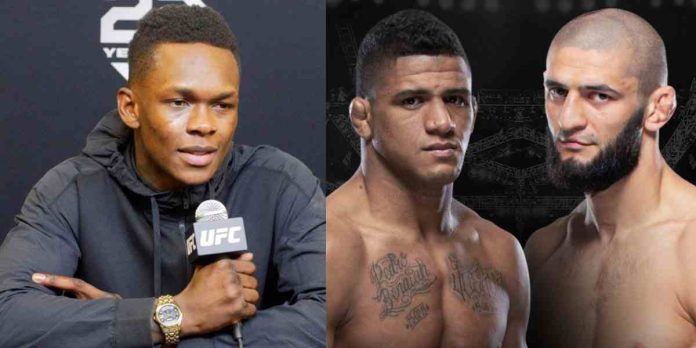 UFC middleweight champion Israel Adesanya has given his thoughts on the highly anticipated welterweight title eliminator between Gilbert Burns and Khamzat Chimaev.

Burns returned to winning ways with a unanimous decision victory over Stephen Thompson at UFC 264, after failing to capture the welterweight title against Kamaru Usman at UFC 258. Chimaev is 4-0 in the UFC, and his rapid rise as a legitimate contender has been nothing short of extraordinary. ‘Borz’ has finished all of his four UFC opponents, with his most recent win coming against Li Jingliang by first round submission at UFC 267.

Israel Adesanya On Burns vs Chimaev

Despite being one of the best welterweights in the world, Burns is a massive underdog, and many, including featherweight champion Alex Volkanovski, believe Chimaev will dominate him.

Adesanya begs to differ, however. Speaking on his YouTube channel, ‘The Last Stylebender’ said that he will be rooting for Burns as he believes ‘Durinho’ has the skills to derail Chimaev’s hype train.

“Burns is the best opponent yet for Khamzat, a guy who has been tested in there, a guy who’s a veteran, jiu jitsu world champion and also former title challenger,” Adesanya said. “I know Burns. He don’t play about it. He’s real. He’s really about this life. I’m glad that he’s up at welterweight now because he’s a lot more better at this weight class… Burns is good but he gets hit. Everyone gets hit. And he’s got power on his punches. You know what, I’ll be rooting for Burns. I think he can get it done.”

Do you agree with Israel Adesanya?