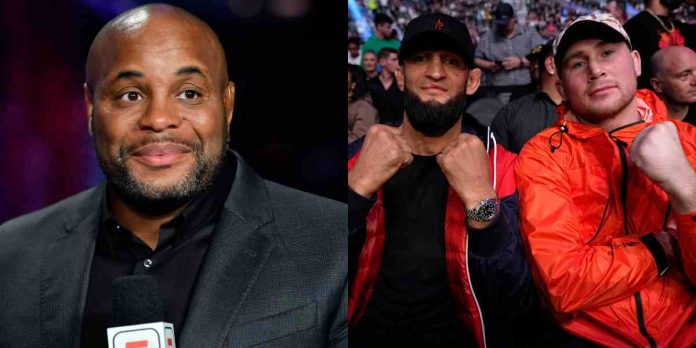 Chimaev, who will face his toughest test to date in Gilbert Burns at UFC 273 this weekend, is training with Darren Till for the fight. The pair, known as ‘Smesh Bros’, has been uploading various videos together on social media, which have garnered a lot of attention. The MMA community is loving the budding bromance between the two, but Cormier believes it could backfire.

Speaking to MMA Fighting, Cormier said that Chimaev should avoid the spotlight as much as he can, and continue to be a mystery to people.

“I love the whole buddy-buddy thing with Darren Till but I think it’s a mistake,” Cormier said. “I think he should continue to be a mystery to people. I think he should have as little time in front of the public and show who he is, pulling the curtain back. I would pull the curtain back as little as I could if I were Khamzat, just because the mystery is good for him. He’s very scary.”

Chimaev’s ultimate goal is to fight for the title, and should he beat Burns, he will likely face the winner of Usman vs Leon Edwards, expected to take place in the summer. Cormier believes ‘Borz’ would be a tough matchup for ‘The Nigerian Nightmare’.

“To say anyone will knock off Kamaru Usman is a lot, but if there’s a guy that seems to be a challenge, it seems to be this guy,” Cormier said. “I can only imagine what the odds would look like if it was Chimaev-Usman. I would love to see the odds when Usman and Burns opened up, because I can’t imagine it was as high as this is. I think that speaks to the dominance that Chimaev has put on paper to this point. It’s big shoes. It’s a lot of hype to live up. The dude seems to have the goods.”