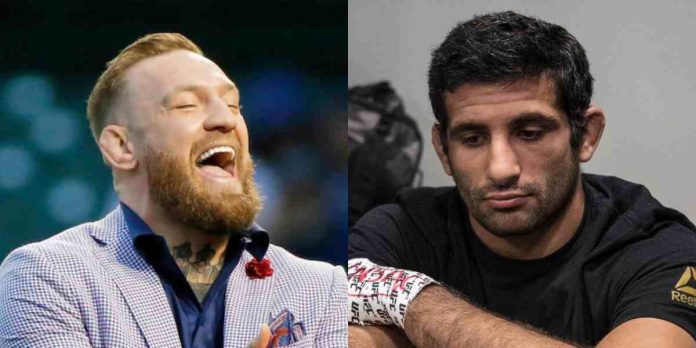 Conor McGregor has fired back at Beneil Dariush after he called Charles Oliveira ‘hypocritical’ for calling out the likes of the Irishman and Nate Diaz instead of deserving lightweight contenders.

During a recent interview, Dariush said that he doesn’t appreciate Oliveira calling out McGregor and Diaz when the Brazilian has unfinished business with him. The Iranian-American and the Brazilian agreed to fight in 2020, but the latter pulled out days later citing family issues. A few weeks later, however, ‘Do Bronx’ accepted a fight against Tony Ferguson at UFC 256, which he won by a lopsided unanimous decision.

Oliveira is currently riding an eleven fight winning streak, with his most recent win coming against Justin Gaethje at UFC 274, where he won by first round submission but lost his title after missing weight. Dariush is currently riding a seven fight winning streak and was scheduled to fight Islam Makhachev in a potential title eliminator earlier this year, but he was forced to withdraw due to injury.

With the lightweight title vacant, Oliveira wants McGregor to be his dance partner. Dariush doesn’t like it, but ‘The Notorious’ doesn’t seem to care about what “the biggest nobody in the company” has to say.

McGregor is coming off back-to-back losses at the hands of Dustin Poirier at UFC 257, where he was brutally knocked out in the second round, and at UFC 264, where he lost by a doctor’s stoppage after breaking his tibia moments before the end of the first round.

The former two-division champ wants to move up to welterweight upon his return in hopes of becoming a three division champion, but a lightweight title fight against Oliveira would be hard to pass up, especially when the uncrowned champ wants to fight him.

Who do you think would win a potential fight between Conor McGregor and Charles Oliveira?