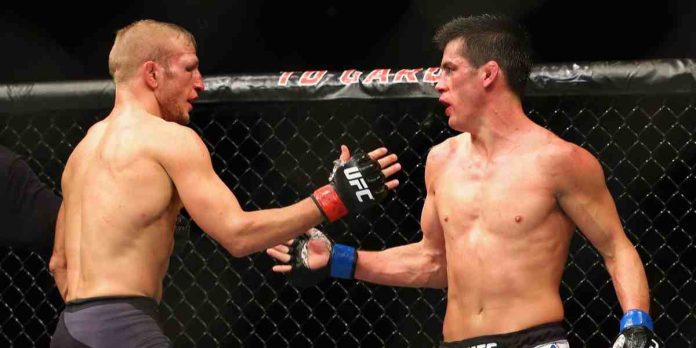 Dillashaw returned to the Octagon after a two year doping suspension in July last year to defeat Cory Sandhagen by split decision at UFC Vegas 32, where he injured his knee, which has kept him out of action till now. The former bantamweight champ however is eyeing a return in the coming months and appears to be the front runner to face Sterling for the title.

During a recent appearance on MMA Fighting’s The MMA Hour, Cruz said that Dillashaw doesn’t deserve to fight for the title, but he understands why the UFC would go ahead with a fight between him and Sterling.

“He was suspended for cheating, so to get a shot after one win, OK, cool,” Cruz said. “Sounds like a hook-up to me. He got two years off, didn’t really lose any money and then just gets right back up in [the title picture]. It’s not like he had an easy fight; Sandhagen’s no joke. But still, one fight? Pedro Munhoz and all these other people that are in the division that have just been competing, competing, competing, it’s crazy. But I kind of get it, because when I was laid off for so long with my knee injuries, I came back, fought [Takeya] Mizugaki, blew my knee out again, and came back and got a title shot.

“But I hadn’t lost, and I hadn’t gotten in trouble for anything – I just blew my knees out. So, it’s a little different, and I got my shot that way. But it’s showing me that what is dominant in each division is ticket sales and storyline, and the storyline of TJ Dillashaw, the fact that he cheated, isn’t really in that. If anything, it just makes people dislike him more, which will make people tune in. So I think that the storyline is more important for the UFC than anything else to sell tickets than who deserves what.”

Do you agree with Dominick Cruz?