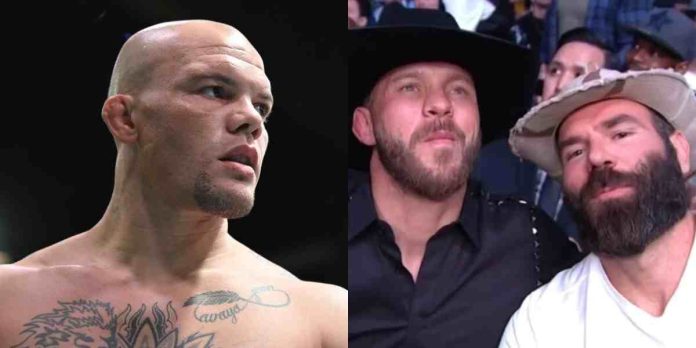 Anthony Smith has accused ‘Cowboy’ Cerrone and poker player Dan Bilzerian of harassing his family during his light heavyweight title fight against Jon Jones at UFC 235.

Anthony Smith On Cerrone And Bilzerian Harassing His Family

Speaking to Michael Bisping (as transcribed by LowKick MMA), Smith said that he was furious when he learned about the incident after the fight and wanted to tear Bilzerian’s head off.

“Dan Bilzerian and Donald Cerrone removed my mom and my wife from their seats while I’m getting ready to fight Jon Jones,” Smith said. “I was f***ing furious. If I had seen Dan Bilzerian … because I had found out about it right after I got to the back, and if I had seen him then, I would have f***ing torn his head off, I was so mad. They come and they wanna sit down and watch the fight, but they’re f***ing hammered.

Smith is currently riding a two fight winning streak, which he hopes to improve to three when he returns to the Octagon to face Magomed Ankalaev at UFC 277 on July 10th.