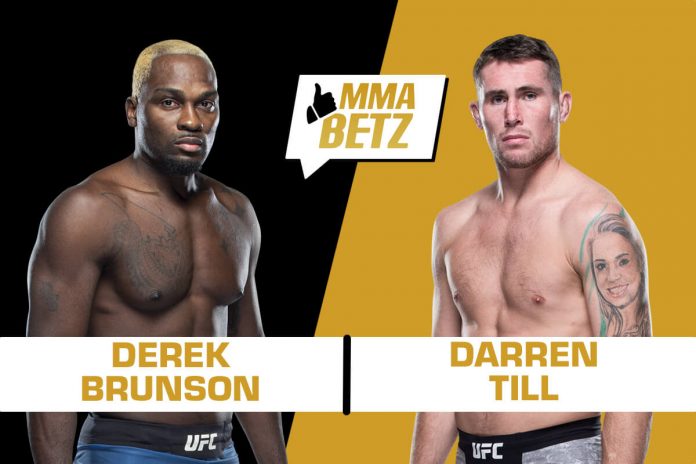 UFC Vegas 36 goes down this weekend at the UFC APEX in Las Vegas. In the main event, Derek Brunson goes toe-to-toe with Darren Till in an important middleweight matchup.

Brunson is currently riding a four-fight win streak, most recently beating Kevin Holland by unanimous decision at UFC Vegas 22. He’ll be in a very strong position to fight for the belt if he bags another impressive win at UFC Vegas 36. Till is coming off a unanimous decision loss to Robert Whittaker at UFC Fight Island 3, but he’s also very much in the title picture. In part because reigning champion Israel Adesanya sees him as a great stylistic matchup.

Brunson vs Till is a good old grappler vs striker matchup. Both fighters are exceptional in their respective fields and will look to impose their will on one another come fight night.

Till has the edge in the striking department from a technical standpoint. He’s faster, more agile and has great cardio and power. Brunson has struggled against high-level strikers in the past, and the longer the fight stays on the feet, the better it will be for the Brit.

In the grappling department, Brunson has the edge. He’s arguably the best wrestler in the middleweight division and lands 2.6 takedowns per 15 minutes. He consistently looks to take the fight to the ground, and is a hard man to keep away from.

The American doesn’t have an overly impressive takedown accuracy, which is 26 percent, but he doesn’t stop until he gets his opponents to the ground. Till is a very good grappler as well, and has an incredible takedown defence, so it will be interesting to see how he handles Brunson’s relentless pressure.

All in all, Till will use his grappling skills to keep the fight on the feet, and stop Brunson.

Prediction: Darren Till by stoppage

Who do you think wins the UFC Vegas 36 main event between Derek Brunson and Darren Till?