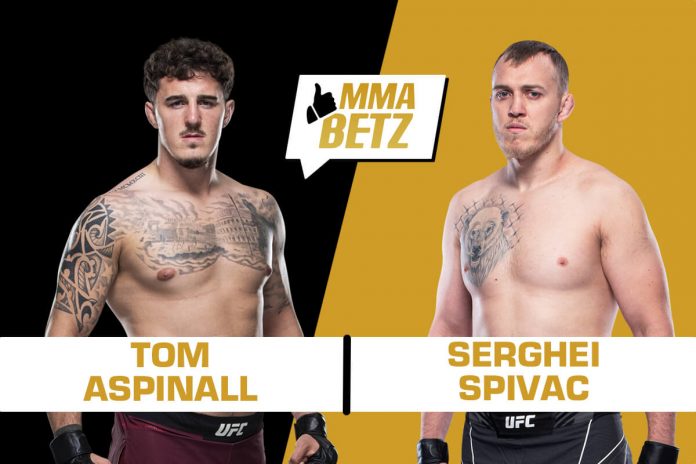 UFC Vegas 36 goes down this weekend at the UFC APEX in Las Vegas. In the co-main event, heavyweight prospects Tom Aspinall and Serghei Spivac lock horns.

Aspinall was originally scheduled to fight Sergei Pavlovich, but the Russian had to pull out due to visa issues. The Brit is currently riding a six-fight win streak and is coming off a big win against Andrei Arlovski by second round submission at UFC Vegas 19. While Spivac is coming off an impressive unanimous decision win against veteran Aleksei Oleinik at UFC Vegas 29.

Aspinall vs Pavlovich would surely have been more eye-catching, but Spivac is an excellent short-notice replacement and a great test for the Manchester native. Aspinall is a very well-rounded fighter, he’s very good on the feet and will have the speed and power advantage on the night. He’ll also have a two-inch height advantage. Spivac isn’t as polished a striker as Aspinall, but he’s still a dangerous man on the feet.

While Aspinall has a significant edge in striking, Spivac has a slight edge in grappling. Aspinall has a higher takedown frequency, as he lands over 3.5 takedowns per 15-minute fight, while Spivac lands nearly 3. The Moldovan heavyweight’s ground control is better, however, and he’s more aggressive on the ground, as he’s always looking for the finish. Aspinall is an excellent grappler as well and has an incredible takedown defence. Spivac has six submission wins to his name, while Aspinall has two.

Both fighters have a good chance of winning at UFC Vegas 36, but Aspinall has more tools in his arsenal and will get the stoppage win on the night.

Who do you think wins the heavyweight co-main event between Tom Aspinall and Serghei Spivac?