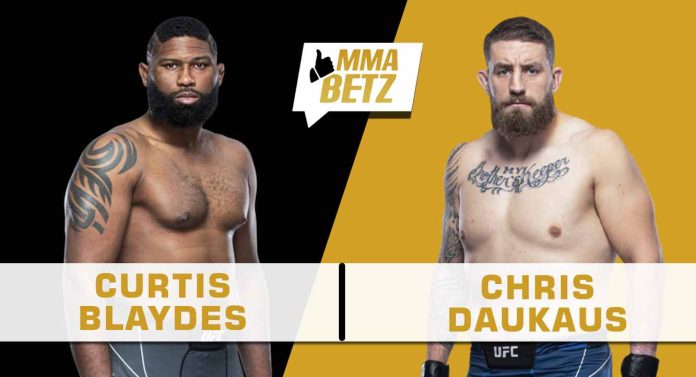 UFC Columbus goes down this weekend at the Nationwide Arena in Columbus, Ohio. In the main event, top contender Curtis Blaydes takes on Chris Daukaus.

Blaydes last fought at UFC 266, where he defeated Jairzinho Rozenstruik by unanimous decision, whereas Daukaus is coming off a first round knockout loss at the hands of Derrick Lewis at UFC Vegas 45.

Blaydes is the best offensive wrestler in the heavyweight division with 43 percent of his significant strikes coming on the ground, but he’s a very capable striker as well. His only losses have come at the hands of Francis Ngannou and Derrick Lewis, both of whom are known for their incredible once punch knockout power.

Daukaus is extremely well-rounded. He is good everywhere and has impressive stoppage wins on his resume, but he doesn’t have one punch knockout power, which has proved to be Blaydes’ Achilles heels on three occasions. Daukaus has a very high output and likes to pressure his opponents, but with Blaydes’ takedown threat, he’ll be forced to stay at distance.

Blaydes has the edge in the grappling department. He’s relentless with his wrestling and lands over six takedowns per 15 minutes. The only way to stop him is to knock him out because once he gets his opponents to the mat, he puts them away more often than not. Daukaus is a BJJ blackbelt, but he has never faced anyone with the level of wrestling as Blaydes.

Expect Blaydes to take Daukaus down and bully him on the mat.

Who do you think will win the UFC Columbus main event between Curtis Blaydes and Chris Daukaus?