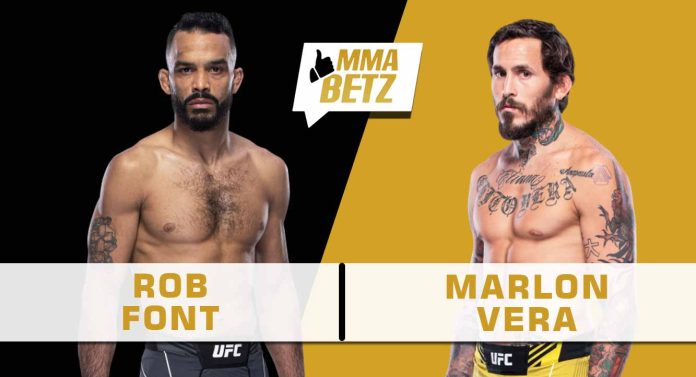 UFC Vegas 53 goes down this weekend at the UFC APEX in Las Vegas. In the main event, Rob Font takes on Marlon Vera in a top ten bantamweight contest.

Font is coming off a unanimous decision loss at the hands of Jose Aldo at UFC Vegas 44, while Vera is currently riding a two fight winning streak, with his most recent victory coming against Frankie Edgar by a highlight reel front kick knockout at UFC 268.

Font is an excellent striker, whose bread and butter is his boxing, although he is very capable on the mat as well. He likes to pressure his opponents with his jab to find openings for his power shots. Vera is a solid kickboxer with power in his shots as well as very solid ground game. Nine out of his last 10 wins have come by the way of stoppage, six by knockout and three by submission. ‘Chito’ is very hittable, however, whereas Font likes to fight at distance and outpoint his opponents with volume and cardio.

The American has the edge statistically as he lands nearly six significant strikes per minute on average compared to Vera’s four. He also absorbs less significant strikes with three and a half per minute, compared to Vera who absorbs close to four and a half. While we shouldn’t expect a lot of grappling in this fight, as both fighters like to stand and trade shots, Vera will have a slight edge in grappling as he has a better submission game.

Font has more tools and is way more experienced than Vera when it comes to five round fights, and these advantages will lead him to victory at UFC Vegas 53. Vera however is a very tough fighter, who has never been finished in his career, so expect Font to win a hard fought decision.

Who do you think will win the UFC Vegas 53 main event between Rob Font and Marlon Vera?