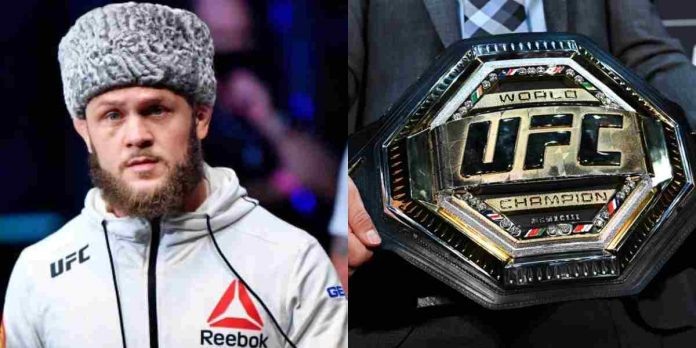 Rafael Fiziev has revealed that a current UFC title holder refereed his first MMA fight, which he won by a spectacular flying knee knockout in 2015.

Fiziev is a highly touted lightweight prospect, who’s won four out of his five fights in the promotion, most recently against Bobby Green by unanimous decision at UFC 265. Prior to that, he earned a highlight reel first round knockout win over UFC veteran Renato Moicano at UFC 256. ‘Ataman’ is now scheduled to face Brad Riddell at UFC Fight Night in December.

Fiziev, who fights out of his native Kyrgyzstan, is a huge fan of his compatriot and UFC flyweight champion Valentina Shevchenko. Speaking to James Lynch, the 28 year old said that he’s trained with ‘Bullet’ in the past and she refereed his first MMA fight.

“When I fought for the first time in my life, she [was the] referee. She refereed my first fight in my life. She [has also been an] example for me throughout my life. She’s an example because she’s now a superstar. She already was a superstar a long time ago.”

Shevchenko is one of the most dominant champions in the UFC. She won the flyweight belt by beating Joanna Jedrzejczyk via unanimous decision at UFC 231, before piling up five successful title defences by beating Jessica Eye, Liz Carmouche, Katlyn Chookagian, Jennifer Maia, and Jessica Andrade. She is now scheduled to defend her title against Lauren Murphy in less than two weeks at UFC 266.

Do you think Rafael Fiziev has the potential to become the second UFC champion from Kyrgyzstan after Valentina Shevchenko?