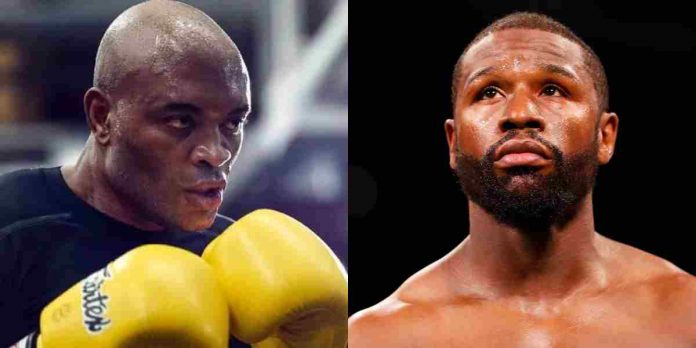 Silva resumed his professional boxing career after his release from the UFC this year, scoring back-to-back wins over Julio Cesar Chavez Jr by split decision and Tito Ortiz by first round knockout. ‘The Spider’ is now being linked to potential showdowns with Logan and Jake Paul.

The Fight That Makes Sense

Speaking to AG Fight, Dorea said that while a boxing match with Logan or Jake could happen, he believes Silva should fight Mayweather next.

“We have the ‘new normal’, with the YouTuber brothers, with millions of followers, testing themselves and promoting themselves a lot,” Dorea said. “It’s a big deal. The brothers talked about him and Anderson is prepared for anyone. But I think the one fight that should happen was between Floyd Mayweather and Anderson Silva. One of the greatest boxing athletes against one of the greatest MMA fighters in the world. Floyd faced Logan Paul, who doesn’t have that much experience in boxing, in an exhibition match. I think I could have a deal. These fights against YouTubers can happen too, because Anderson wants something that motivates him. We will have good news soon.

“It’s my wish and his. We have great respect for Floyd Mayweather and he is one of the greatest boxing athletes in history. He tested himself against a YouTuber heavier than him, so why not Anderson Silva? It would break all pay-per-view records. We would like to do. It has everything to do.”

Mayweather last competed in a boxing exhibition against Logan in June. ‘Money’ previously fought MMA megastar Conor McGregor in a professional boxing match in 2017, when he won by TKO in the tenth round.

Would you be interested in a potential boxing match between Anderson Silva and Floyd Mayweather?