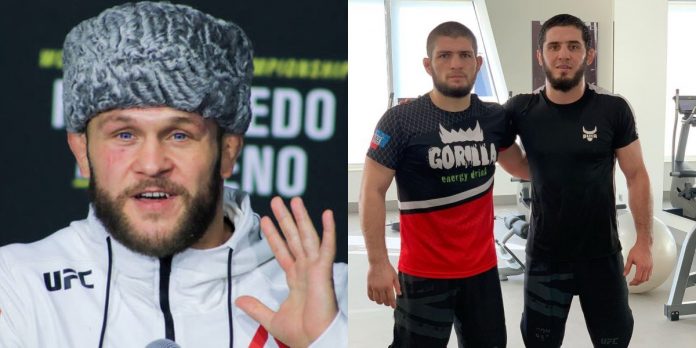 Rafael Fiziev has revealed why he isn’t an admirer of former UFC champion Khabib Nurmagomedov and his long term friend and training partner, Islam Makhachev.

Fiziev is coming off a unanimous decision victory against Bobby Green at UFC 265 this past weekend, and is a highly-rated prospect with six career wins by knockout. Although he has trained in Sambo and continues to improve his BJJ, ‘Ataman’ prefers to stand and trade, and isn’t a big fan of grappling.

‘I Was Never His Fan’

Speaking to James Lynch (as transcribed by BJPenn.com), Fiziev said that although Khabib and Makhachev’s grappling-heavy fighting style is very dominant, he doesn’t like it.

“I was never his fan because we have different styles,” Fiziev said. “We have big different styles. I’m a striker and he’s a wrestler. In wrestling, he’s very hard and you can win against everyone with his wrestling that Khabib has, but I don’t like this style. I don’t like fights like when Islam Makhachev fought with Drew Dober (at UFC 259). Three rounds of just wrestling and nothing to show. He finished him, but it was a boring fight.”

Khabib retired from the sport after successfully defending his title against former interim champion Justin Gaethje in their title unifier at UFC 254 last October. The Dagestani ended his fighting career at 29-0, thanks to his dominant fighting style, which helped him earn comfortable wins over the likes of Conor McGregor and Dustin Poirier.

Makhachev is coming off an impressive third-round submission win against Thiago Moises at UFC Vegas 31, and is now scheduled to fight Rafael dos Anjos at UFC 267, expected to take place in October on Fight Island in Abu Dhabi, UAE.

Do you agree with Rafael Fiziev that Khabib Nurmagomedov and Islam Makhachev’s fighting style is boring?