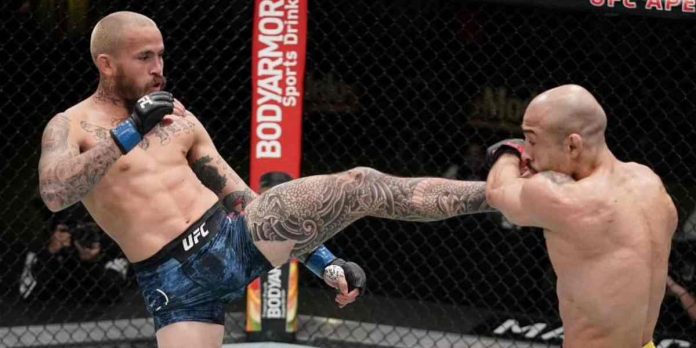 Fresh off his victory over Rob Font at UFC Vegas 53, Marlon Vera has called for a rematch with Jose Aldo.

Vera put a beating on Font over the course of five rounds at UFC Vegas 53 this past Saturday. The 34-year-old started off well, staying busy in the first round and landing more shots than ‘Chito’, who upped the ante from the second round onwards, landing bombs on his opponent and hurting him multiple times to win by a unanimous decision (48-47, 49-46 and 49-46).

Immediately after the fight, Vera called out Aldo, TJ Dillashaw and Petr Yan but he seems keener on running it back with ‘The King of Rio’.

During the post-fight press conference (as transcribed by MMA Junkie), Vera called out Aldo saying that he would love to ‘kick his ass’.

“Every time you get in there, you learn the job,” Vera said. “So I feel confident with the skills we showed today. I feel like I’m getting better. I’ll be back in the gym next week and we’ll go from there. I would love to fight Aldo again, especially in a five-rounder – just because he declined a five-rounder when he fought in December [2020]. I would love to kick his ass. If we get matched, I will finish him. I can guarantee you that.”

Aldo has been calling out bantamweight champion Aljamain Sterling ever since his victory over Petr Yan at UFC 273, and ‘The Funk Master’ is also willing to throw hands with the former featherweight champion. If the UFC books a fight between the two, Vera will have to wait for his opportunity, but he isn’t short of options.

After Vera’s solid win over Font, Yan took to Twitter to congratulate him and said that he would like to share the Octagon with him in the future.

Who do you think would win a potential rematch between Marlon Vera and Jose Aldo?