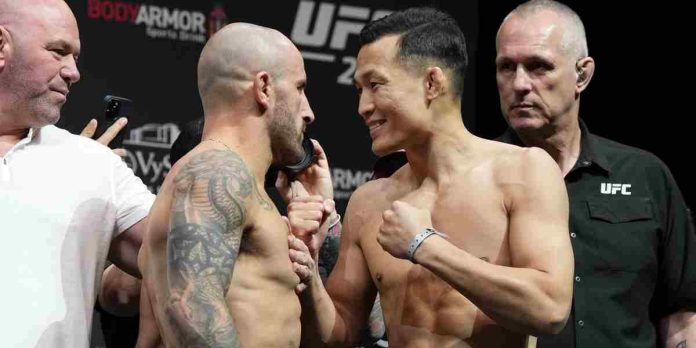 UFC 273 went down on Saturday night at VyStar Veterans Memorial Arena in Jacksonville, Florida. In the main event, featherweight champion Alex Volkanovski stopped ‘The Korean Zombie’ in the fourth round of a completely one-sided fight, with the Aussie showcasing that he’s better than his opponent and by a good margin. He will likely put his title on the line in a trilogy against Max Holloway next.

In the co-main event, Aljamain Sterling proved his critics wrong by making his first successful title defence with a closely-contested split decision victory over Petr Yan, before calling out former champion TJ Dillashaw in his post-fight Octagon interview.

Elsewhere on the UFC 273 main card, Khamzat Chimaev passed the toughest test of his career by scoring a unanimous decision victory over Gilbert Burns in a fight that truly tested his resolve. Also, Mackenzie Dern returned to winning ways with a split decision win against Tecia Torres and Mark Madsen defeated Vinc Pichel by unanimous decision.

Alex Volkanovski defeats ‘The Korean Zombie’ by fourth round TKO (0:45)