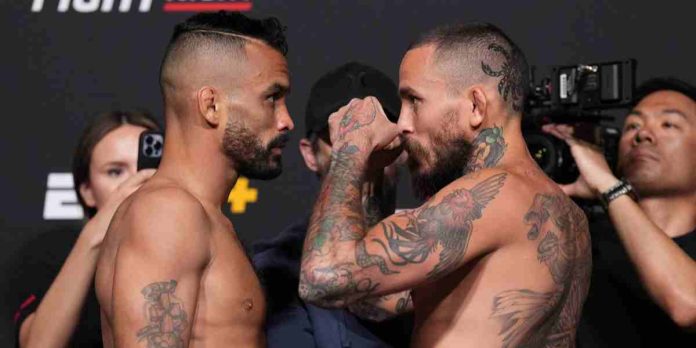 UFC Vegas 53 went down on Saturday night at the UFC APEX in Las Vegas. In the main event, Marlon Vera put on a show in his first headliner, beating Rob Font to earn a unanimous decision victory. Font landed more strikes overall and remained busy, but Vera’s power and unpredictability were the difference as ‘Chito’ hurt his opponent a number of times during their five round battle.

In the co-main event, Andrei Arlovski improved his winning streak to four in a row with a controversial split decision victory against Jake Collier.

Elsewhere on the UFC Vegas 53 main card, Joanderson Brito stopped Andre Fili in only 41 seconds to bounce back after losing his UFC debut in January, Grant Dawson returned to winning ways after a draw in his previous fight by submitting Jared Gordon in the third round, Darren Elkins returned to winning ways with a dominant performance against Tristan Connelly and Krzysztof Jotko improved to two wins in a row with a unanimous decision victory over Gerald Meerschaert.