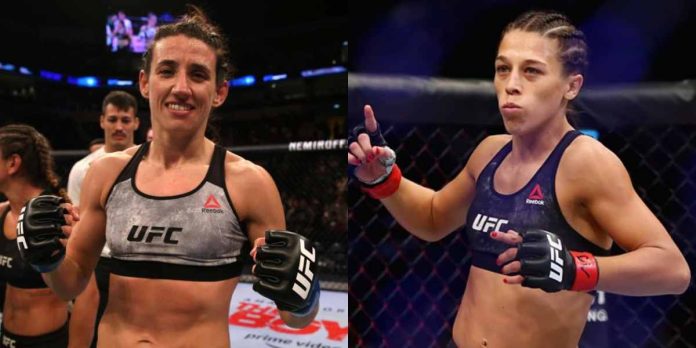 Marina Rodriguez has turned her guns on Joanna Jedrzejczyk after her huge win over Mackenzie Dern in the UFC Vegas 39 main event this past weekend.

Rodriguez cemented her place as a legitimate contender in the strawweight division by putting on a striking clinic against Dern, who didn’t have much success, except for a solid second round, where she had her foe in a world of trouble, after securing her only takedown of the fight. The Muay Thai stylist survived the second frame, and upped the ante, picking apart the BJJ ace for them remainder of the fight to earn a unanimous decision victory.

With an impressive showing against Dern, Rodriguez is expected to enter the strawweight top five this week and will be looking to fight another opponent above her.

When asked about a potential fight with former champion and number two ranked contender Jedrzejczyk, during the UFC Vegas 39 post-fight press conference (as transcribed by BJPenn.com), Rodriguez said that the Pole doesn’t want to fight her, and should be removed from the rankings because she has been out of action for so long.

Jedrzejczyk last fought at UFC 248 in March 2020, when she lost to Zhang Weili by a razor close split decision in one of the greatest fights in women’s MMA history.

Do you agree with Marina Rodriguez?