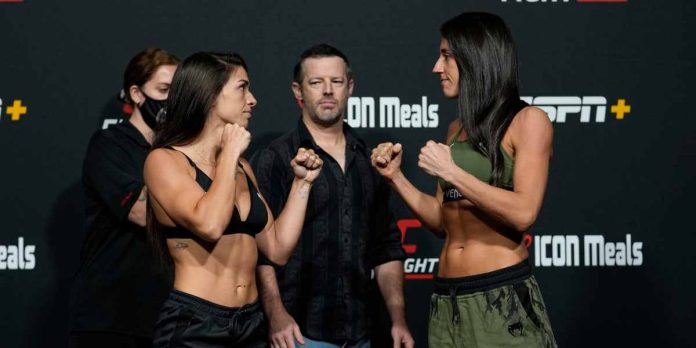 UFC Vegas 39 went down at the UFC APEX in Las Vegas on Saturday evening. In the main event, Marina Rodriguez bagged the biggest win of her career by beating Mackenzie Dern four rounds to one. The Rio Grande do Sul native, who’s now on a three-fight winning streak, is expected to enter the strawweight top five on Tuesday, which means that a potential title fight or a title eliminator is now well within her reach.

In the co-main event, Randy Brown improved to two wins in a row by out striking Jared Gooden to score a solid unanimous decision victory. Elsewhere on the UFC Vegas 39 main card, Matheus Nicolau improved his winning streak to five in a row by beating Tim Elliot by unanimous decision, Maria Agapova bounced back from her shock defeat to Shana Dobson by submitting Sabina Mazo in the third round, and Chris Gutiérrez continued his undefeated run in the UFC, beating Felipe Colares by split decision.