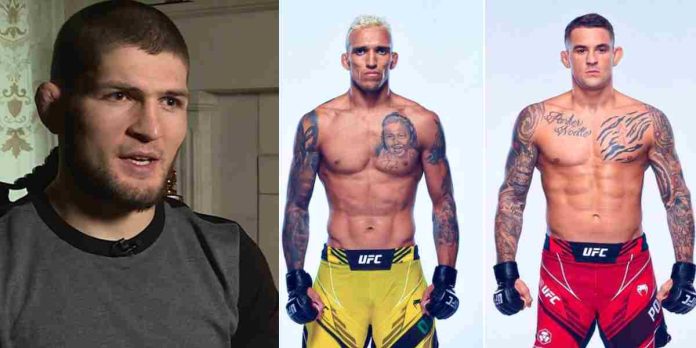 Khabib Nurmagomedov has given his thoughts on the lightweight title fight between Charles Oliveira and Dustin Poirier, set to take place this weekend in the UFC 269 main event.

The former champ retired from the sport after successfully defending his title against Justin Gaethje by second round submission at UFC 254 in October last year and vacated his belt a few months later in February. Oliveira, who is currently riding a nine-fight win streak, finished Michael Chandler in the second round at UFC 262 to win the vacant title.

Poirier has won eight out of his last nine fights, with his most recent victory coming against Conor McGregor by a doctor’s stoppage at UFC 264. His only loss in the last five years came at the hands of Khabib in their 155-pound title fight at UFC 242.

Khabib On Oliveira vs Poirier

Speaking to ESPN (as transcribed by MMA Fighting), Khabib said that he’s giving Poirier a slight edge due to his cardio and durability.

“I have it 60/40 Dustin Poirier because of his cardio and heart,” Khabib said. “Charles is a very, very dangerous opponent. Right now, he’s a real champion. He has a nine [fight] win streak, he beat Tony Ferguson, he finished eight [other] guys. It’s a very interesting fight for me, but I think it’s 60/40 Dustin Poirier.”

With a 90 percent finishing rate, Oliveira is a very dangerous campaigner indeed, but Khabib believes that if Poirier stays calm and takes his opponent into deep waters, he will win the fight.

“This guy is a real finisher,” Khabib said. “He’s very dangerous. I think if Dustin Poirier can take him to the deep ocean like he told us, I think he’s gonna win. If he [rushes], I think Charles Oliveira has a chance to win.”