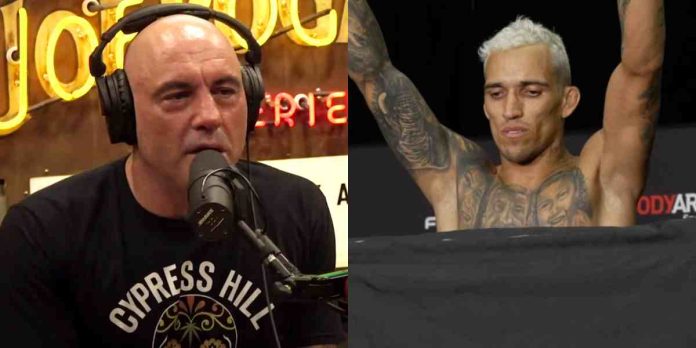 Oliveira became the first champion in UFC history to be stripped of his title after missing weight by half a pound for the UFC 274 main event, where he beat Gaethje by first round submission. Although all fighters except for ‘Do Bronx’ and Norma Dumont made weight, several fighters and officials complained that the scale was tampered with. The UFC said that it will be implementing stern measures to prevent similar issues in the future.

Speaking on his ‘The Joe Rogan Experience’ podcast (as transcribed by MMA Junkie), Rogan said although he’s not making an excuse for Oliveira, he believes that the scale was off.

“He got screwed in his last fight,” Rogan said. “There were some shenanigans with the scale. Some people had messed with the scale. Here’s a problem with these digital scales: Foreign fighters, they use kilograms and in America, obviously we use pounds. These scales are calibrated and then the foreign fighters would reset the scale so they could switch it back to kilograms. So it f***s up the whole calibration. He weighed in the night before the weigh-ins, and he was like, ‘Oh, I’m good to go.’ And then in the morning, he goes and shows up for the weight cut, and it’s a pound plus off, and that is directly related to this calibration thing.

“Now the UFC has a new policy because of this where they have a guard who watches over the scale 24 hours a day. They have shifts where no one can f*** with the scale. If you’re gonna get on and try yourself, they’re gonna watch you like a hawk, you don’t press any buttons. Just get on, what’s your weight? Get off. That’s it. These guys were monkeying around with the scale. There should have been someone watching the scale and the scale was off, that’s a fact and that’s why Oliveira — it’s not the best excuse because Justin Gaethje made weight. Everybody else made weight except one of the women who fought earlier in the night (Norma Dumont). But that’s it.”