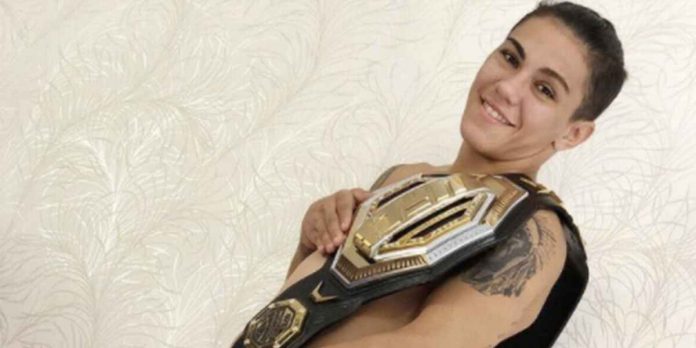 Former UFC strawweight champion Jessica Andrade has said that she’s very happy with her decision to join OnlyFans, despite the fact that her nude photos were leaked by one of the users.

Andrade joined OnlyFans a few months back on the advice of her wife Fernanda Gomes to make some extra cash. She’s not the only one, however, as a plethora of MMA fighters and personalities, including Pearl Gonzalez, Felice Herrig, Rachael Ostovich, Valerie Loureda, and Diego Sanchez, have also joined the London-based content subscription service.

Unfortunately for Andrade, her nude photos have leaked and are going viral in Brazil, but ‘Bate Estaca’ told MMA Fighting that she knew it could happen so she’s not upset.

“I wasn’t upset because I already imagined it could happen,” Andrade said. “I’ve seen that happen to other fighters as well. I wasn’t upset because I did all this knowing that it would leak eventually. I’m 30 and my body won’t look pretty for the rest of my life, so we have to enjoy it while it’s nice. No one will want to see it later. [Laughs] Better use it now, then when it’s gone. But I wasn’t upset. I thought it was funny because people did a lot of memes.”

Although she knew it could happen, it was still a learning experience for Andrade and she’s only sharing content with the right people now.

“If I had done [those photos] against my will, it would’ve been different,” Andrade said. “But I did that knowing it would probably happen. Not everyone is honest with you all the time. The photos were a package to one person but you don’t know this person’s heart and nature, and unfortunately, that happened. But it was a learning experience. So we do photos now, but only to the right people and the right way.”

How Much Money Is She Making Through OnlyFans?

When asked about her earnings, Andrade said that she’s making so much money through OnlyFans that she hasn’t had to use the money she earned from her title fight against Valentina Shevchenko at UFC 261, which was almost five months ago.

“I paid off my car and six or seven months of rent [in Las Vegas] in advance,” Andrade said. “I haven’t even used the money of my last fight’s purse. I was able to pay my bills in Brazil, help my family and help Fernanda’s family with OnlyFans’ money.

“It’s nice when you check your account and see the money is still there. You’re like, ‘My God, I’m buying a lot of stuff on Amazon, my house is like a market right now, and the account remains the same. Even though the photos have leaked, it was only four or five photos.”

The 29-year-old also dismissed the idea that OnlyFans is merely an adult platform.

Andrade will make her return to the Octagon against Cynthia Calvillo at UFC 266 on September 25th.

Do you think Jessica Andrade will beat Cynthia Calvillo at UFC 266?