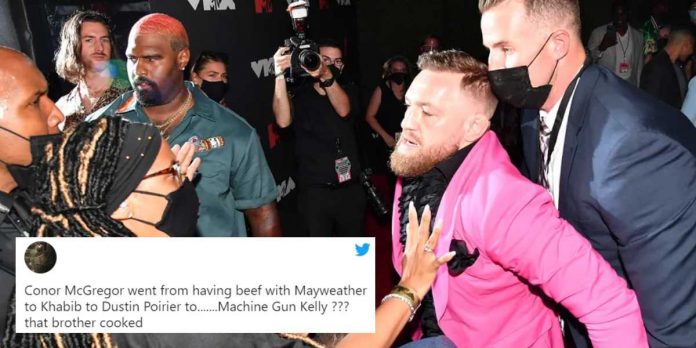 Former UFC two division champion Conor McGregor is in the news for all the wrong reasons again. The Irishman and musician Machine Gun Kelly got into a scuffle and had to be separated on the red carpet at the MTV Video Music Awards on Sunday in New York.

A video uploaded on Twitter showed McGregor and Kelly exchanging heated words as they stood across from each other before ‘The Notorious’ threw his trademark left hook, although it didn’t land on the Ohio native. The security was quick to react and separate the two.

According to TMZ, the altercation started after McGregor allegedly asked Kelly for a photograph but was denied. Kelly then pushed the Dublin native, making him stumble backwards and spill his drink, which he threw at MGK moments later.

McGregor’s spokesperson denied the report, however, saying that neither did he know who Kelly was before the incident nor did he ask for a photograph.

“Conor McGregor did not ask anyone for a picture, nor did he instigate this incident,” McGregor’s spokesperson said. “He does not know Machine Gun Kelly, outside of the fact that he attended Conor’s fight this past July.”

The UFC megastar also addressed the incident saying that he didn’t know who Kelly was before he ran into him at the award show.

“Nothing happened with me, I only fight real fighters. People that actually fight,” McGregor said. “I certainly don’t fight little Vanilla Ice white rappers. I don’t even know the guy. I don’t know anything about him, except that he’s with Megan Fox.”

The incident has sent social media into a frenzy. Here’s how the MMA community reacted to McGregor’s scuffle with Kelly.

What do you make of Conor McGregor’s scuffle with Machine Gun Kelly?