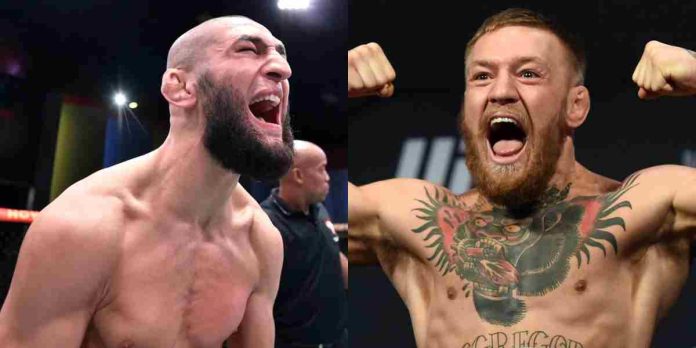 Jared Cannonier has given his thoughts on Khamzat Chimaev, labelling him as the second coming of former two-division UFC champion Conor McGregor.

Chimaev, who competes at both welterweight and middleweights, wants to follow in the footsteps of McGregor and become a two-division champion simultaneously.

Speaking to LowKick MMA (as transcribed by MMA News), Cannonier outlined the similarities and differences between Chimaev and McGregor.

“You know, [he’s a] hot prospect right now. Dana’s pretty hot on him, and from what he’s shown in the Octagon, the dude looks like the second coming of Conor McGregor,” Cannonier said. “But I don’t even like to make that comparison because he is his own self, he is his own man, and he’s doing his own thing. I tip my hat to the man. He’s doing a good job… If he comes up to ’85 that’d be cool too. The more the merrier as far as I’m concerned.”

The Chechen-Swede wants to fight Gilbert Burns next, while McGregor is eyeing a title fight against lightweight champion Charles Oliveira upon his return this summer.

Do you agree with Jared Cannonier that Khamzat Chimaev is the second coming of Conor McGregor?