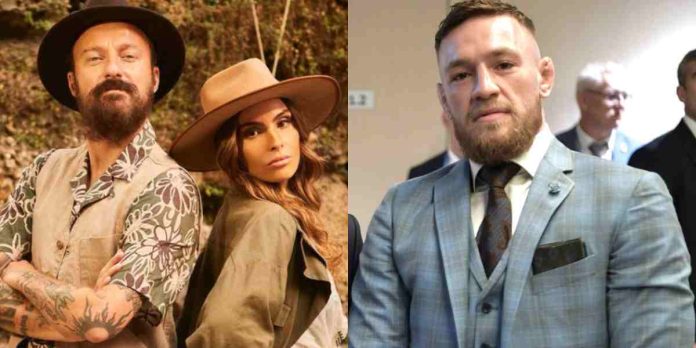 DJ Francesco Facchinetti’s wife has urged fellow Italians to stay away from Conor McGregor, after he allegedly assaulted her husband.

Hours after having his son baptized at the Vatican on Saturday, McGregor allegedly punched Facchinetti in the face and broke his nose at a party late at night. The DJ claimed that the attack was unprovoked and he and his wife had been partying with the Irishman and his fiancée, Dee Devlin, when he punched him in front of several witnesses.

“He attacked me without motivation as we talked for more than two hours and we also had fun together,” Facchinetti said on Instagram (as translated by TMZ). “I could have shut up and not say anything to anyone, but since I’m here to tell you, I must say that that person is really violent and dangerous.”

Facchinetti’s wife, Wilma Helena Faissol, also took to Instagram to reiterate her husband’s stance and urged her compatriots to stay away from McGregor as long as he’s staying in Italy.

“Out of nowhere, he threw a punch in the face of Francesco,” Faissol said. “He was inviting us to another party. Francesco said, ‘Okay, let’s go’ and he hit him. Luckily, he (Francesco) was very close so he (Conor) couldn’t load up on his punch. Francesco flew back, fell on the table, and then on the ground. The first thing that came to mind was ‘are we kidding? Is it a show?’ Then I was paralysed.

“I turned around and saw that his friends were holding him against the wall because he wanted to continue beating Francesco. Then they took him away. I turned on the light and the guards turned them off. Francesco was bleeding. I wanted to help him and the guards chased us away. He will stay in Italy until October 26th. If you see him stay away from him. Don’t go near him and ask for autographs because he is an unstable and dangerous person.”

McGregor’s latest controversy comes a month after he engaged in a heated altercation with Machine Gun Kelly at the MTV VMA Awards in Brooklyn, New York.

What do you make of Conor McGregor’s alleged attack on DJ Francesco Facchinetti?