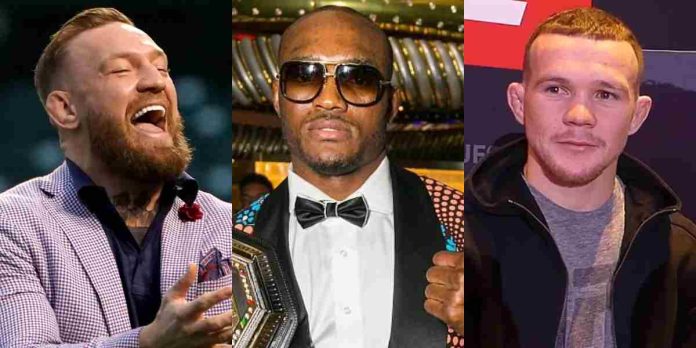 Kamaru Usman and Petr Yan have fired back at Conor McGregor after his recent Twitter tirades rubbed them up the wrong way.

McGregor is currently recovering from a broken tibia he suffered at UFC 264, where he lost to Dustin Poirier in their trilogy. While on the sidelines, ‘The Notorious’ has been keeping himself busy by exchanging verbal jabs with potential opponents, and fellow UFC fighters on social media.

Responding to a fan who ranked McGregor as the third best boxer in the UFC, with Yan being number one, the former two division champ said that he’s superior to everyone else on the roster when it comes to boxing, adding that he’d rip the Russian up.

Yan countered by challenging McGregor to a boxing match.

While McGregor didn’t accept the challenge, he said that he’s down to a sparring session with Yan down the road. ‘No Mercy’ responded by taking a jab at the Irishman’s gas tank.

McGregor also took jabs at Jorge Masvidal for pulling out of his UFC 269 bout against Leon Edwards due to an undisclosed injury, with ‘Gamebred’ immediately firing back. Hours later, Usman came to his former two time opponent’s defence, reminding McGregor of the excuses he made after losing his last few fights.

The Dublin native was clearly not impressed and fired at Usman saying that he lacked originality, accusing the welterweight champion once again of copying his style and persona.

McGregor is eyeing a return next summer and has a number of potential opponents, including Michael Chandler, Tony Ferguson, and Nate Diaz. Usman successfully defended his title against Colby Covington at UFC 268 this past weekend, while Yan won the interim bantamweight title by beating Cory Sandhagen at UFC 267, and will likely face reigning champion Aljamain Sterling next.