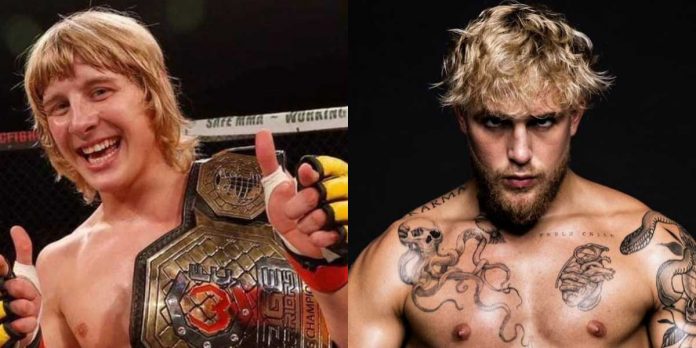 After making a lot of buzz on the internet with his comments about Conor McGregor and Khabib Nurmagomedov recently, UFC newcomer Paddy Pimblett has turned his guns towards YouTuber-turned-boxer, Jake Paul.

The former Cage Warriors champion is set to make his UFC debut against Luigi Vendramini at UFC Vegas 36 on September 4th. Pimblett is the biggest name to join the UFC from the UK-based promotion since Conor McGregor and has a lot of hype behind him.

Paul will lock horns with former UFC welterweight champion Tyron Woodley in a professional boxing match this weekend at the Rocket Mortgage FieldHouse in Cleveland, Ohio. ‘The Problem Child’ is a 3-0 pro boxer, with his most recent win coming against Ben Askren by first round stoppage. ‘T-Wood’ will be making his pro boxing debut.

Speaking To James Lupton of Slothboxx, Pimblett, who’s better known for his grappling, said not only would he accept a boxing match with Paul in a heartbeat, but he’d also knock him out.

“I’d box him tomorrow if I get a phone call now and I really, genuinely think over the next few years, it could happen because when I make my debut in a few weeks,” Pimblett said. “I’m going to blow up and I’ll have hundreds of thousands of followers, maybe millions and it’s going to go wild and I can see him thinking the same. ‘Oh, Paddy The Baddy, he is a grappler’, all that and I’ll f***ing take his head clean off his shoulders, lad.”

Pimblett has drawn the ire of Khabib and McGregor fans in recent weeks for calling the Dagestani ‘the Karen of MMA’ and saying that he’d smoke the Irishman in a fist fight.

As far as McGregor is concerned, he has nothing but best wishes for the 26 year old from Liverpool.

Would you be interested in a potential boxing match between Paddy Pimblett and Jake Paul?