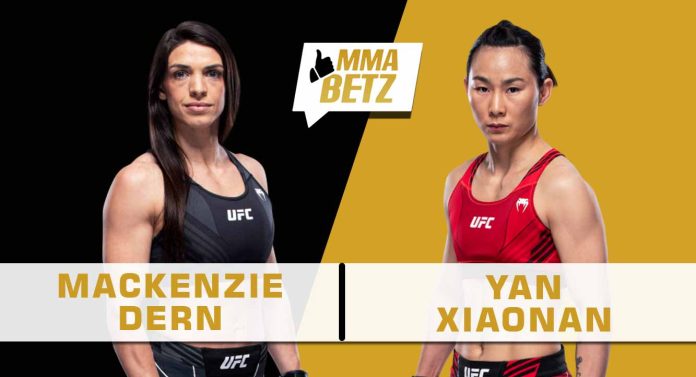 UFC Vegas 61 goes down this weekend at the UFC APEX in Las Vegas. In the main event, BJJ phenom MacKenzie Dern takes on China’s Yan Xiaonan.

Dern failed to impress in her first UFC main event at UFC Vegas 39, where she lost to Marina Rodriguez by unanimous decision. She will be looking to make the most of her second headliner when she faces Yan, who is currently riding a two fight losing streak.

Dern is one of the best submission grapplers in the UFC, and if she succeeds in taking the fight to the ground, it will be over sooner rather than later. Her takedown accuracy is poor however, and she has struggled to take her opponents down and keeping a hold of them on the mat. Yan has a decent takedown defence and has so far held her own against anyone not named Carla Esparza. ‘Fury’ is a fantastic striker with smart footwork, quick entries and the ability to move in and out. Dern will have her work cut out as long as the fight stays on the feet, so she will have to take her opponent down as soon as possible to work her magic.

Dern’s grappling will have to be perfect if she wants to get her hand raised this weekend, but given her poor offensive wrestling and mediocre striking, she will struggle against a superior striker in Yan, who should be able to pick her apart and earn a decision win.

Who do you think will win the strawweight main event between Mackenzie Dern and Yan Xiaonan at UFC Vegas 61?