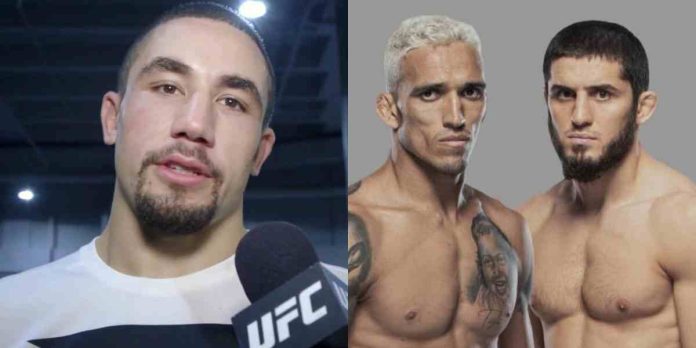 Robert Whittaker has given his thoughts on the vacant lightweight title fight between Charles Oliveira and Islam Makhachev, scheduled to headline UFC 280 this month.

Makhachev has already revealed his gameplan, saying that he will finish Oliveira in the third round. The Dagestani will stick to his wrestling to try and beat ‘Do Bronx’, who is confident that he can beat his opponent wherever the fight goes. The Sao Paulo native is the best submission grappler in the UFC, and is very comfortable fighting off his back.

Whittaker believes Oliveira’s willingness to go to the ground with Makhachev could easily backfire. Speaking to James Lynch (as transcribed by Sportskeeda), the former UFC middleweight champion gave his thoughts on the highly-anticipated matchup.

“If I was a betting man, [I’d pick] Makhachev,” Whittaker said. “Just because of the fact that Oliveira can be taken down because he has such faith in his jiu-jitsu game, especially defensive jiu-jitsu, playing off his back. He’s so good at straight-line attacks defensively, like his knees and his elbows and his strikes that stops people from getting in… But Makhachev’s wrestling and grappling is obviously top, top tier. You look at his team and the work he has put in. If I had to make a bet, I would put it on Makhachev.”