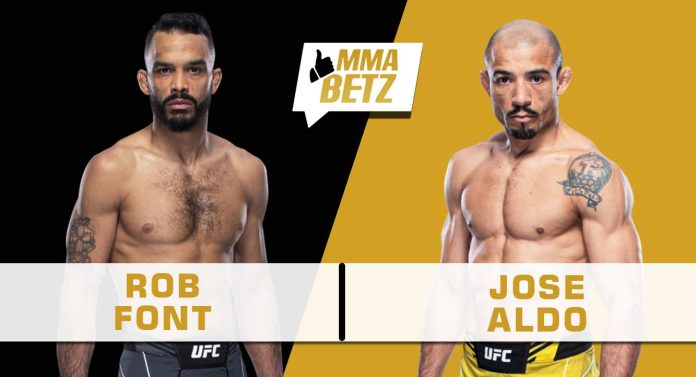 UFC Vegas 44 goes down this weekend at the UFC APEX in Las Vegas. In the main event, Rob Font and Jose Aldo clash in a key top-five bantamweight contest.

Both Font and Aldo are excellent fighters. The Brazilian is better-rounded as he’s solid in every department. Font is a technical striker who utilises a patient and calculated approach inside the Octagon. Font has excellent distance management, so he will look to utilise his jab to keep Aldo at distance. Aldo will have to take risks and close the distance to put Font off his game. Aldo’s leg kicks will be key come fight night as they will allow him to limit his foe’s movement.

Statistically, Font has the edge as he lands a little over five significant strikes per minute on average, while he absorbs a little less than four. Aldo lands and absorbs nearly three and a half strikes per minute on average. Font has more power in his hands as he scores one knockdown per 15 minutes, while Aldo scores a knockdown every 45 minutes.

While the two fighters prefer a standup fight, they are very solid grapplers as well. Both fighters are offensively very good on the mat, although Aldo has the edge in that department. Aldo is also better defensively and is a hard man to take down. Font doesn’t have a very impressive takedown defence.

Font has the edge as far as endurance is concerned, whereas Aldo tends to struggle in a five-round fight. The longer the fight spans, the better it will be for Font. It’s going to be an extremely entertaining contest, but Font will get his hand raised on the night.

Who do you think will win the top-five bantamweight clash between Rob Font and Jose Aldo at UFC Vegas 45?