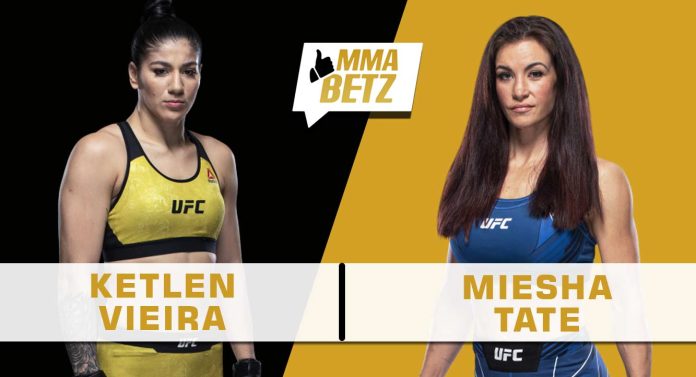 UFC Vegas 43 goes down this weekend at the UFC APEX in Las Vegas. In the main event, Ketlen Vieira takes on former bantamweight champion Miesha Tate in a top ten matchup.

Vieira’s most recent outing ended in a loss to Yana Kunitskaya at UFC Vegas 19, while Tate made an impressive return to fighting after a five-year lay off, finishing Marion Reneau in the third round at UFC Vegas 31. Both fighters have a big chance to enter the top five with an impressive performance this weekend.

In her comeback fight against Reneau, Tate looked in great shape, was quick and athletic, landed solid combinations and controlled the fight on the mat. Vieira didn’t impress much in her last outing as she once again showed holes in her distance striking. She’s an excellent grappler however, but so is Tate, and it’ll be interesting to see how the Brazilian matches up with a far more experienced campaigner in ‘Cupcake’.

Both Vieira and Tate have a high grappling output as they land over 2 takedowns per fight, but Tate is the more active of the two fighters in the submissions department, as she attempts 1.5 submissions per fight. Tate doesn’t have a great takedown defence, whereas Vieira is a tough girl to take down.

All in all, Tate will use her experience and well-rounded skill set to get the win.

Who do you think will win the UFC Vegas 43 main event between Ketlen Vieira and Miesha Tate?