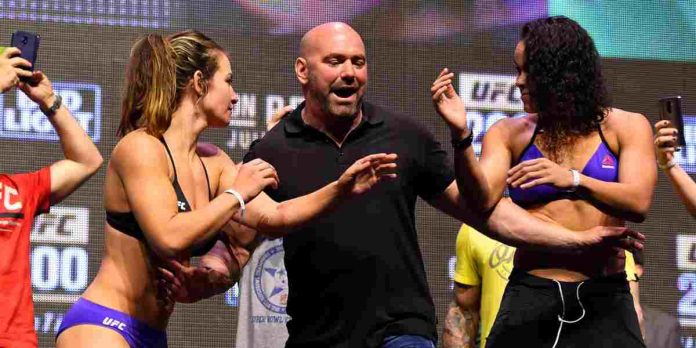 The former champ lost her title to Nunes at UFC 200, where she was brutally finished in the first round. ‘Cupcake’ retired after losing a second consecutive time to Raquel Pennington at UFC 205 in 2016, but made her comeback earlier this year at UFC Vegas 31, where she finished Marion Reneau in the third round. Tate will now face Ketlen Vieira in the main event of UFC Vegas 43 this weekend.

Speaking to ESPN (as transcribed by BJPenn.com), Tate said she is confident that she would beat Nunes in a potential rematch.

“I know that sometimes you only get one shot. When I take that shot at Amanda, it will be the perfect timing. I’ll have the perfect aim,” Tate said. “I will be the sniper to take her out. But I’m not gonna jump the gun. I’m going to build my way into it and make sure I’m allowing my body the time to evolve, my mind, everything to be in that perfect form so that when I get to that title shot, I’ll be ready.”

Tate also said that her entry into the bantamweight mix will spice things, with contenders wanting to fight her as much as they’d want to go after Nunes.

Nunes is scheduled to defend her bantamweight title against Julianna Pena at UFC 269 next month.

Do you think Miesha Tate would beat Amanda Nunes in a potential rematch?