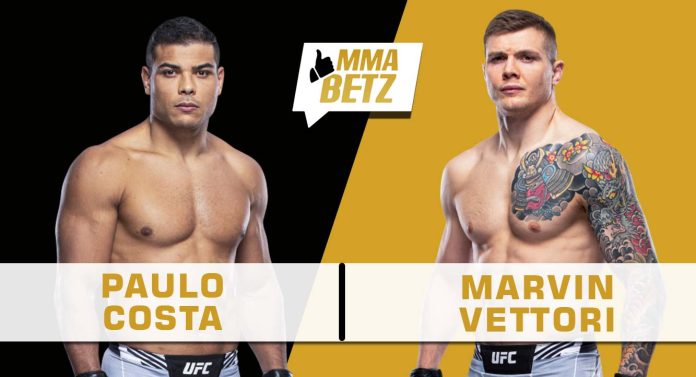 UFC Vegas 41 goes down this weekend at the UFC APEX in Las Vegas. In the main event, Paulo Costa takes on Marvin Vettori at light heavyweight.

The fight was originally scheduled to take place at middleweight, but will now take place at light heavyweight as Costa refused to compete at 185 pounds, and at a 195 pounds catchweight due to weight cutting issues. The Brazilian has pulled out of his scheduled bouts a couple of times since his loss to middleweight champion Israel Adesanya at UFC 253, where he was TKO’d in the second round.

Costa vs Vettori is a very intriguing matchup between two extremely intense fighters. ‘The Eraser’ is a vicious brawler, who moves forward with mean intentions, while ‘The Italian Dream’ is a well-rounded fighter who combines high-pressure striking with good wrestling. Vettori is also more technically sound, and has one of the best chins in the middleweight division.

Grappling is Vettori’s strength and he will have the edge in that department come fight night. Vettori lands a little over 2 takedowns and attempts nearly 1 submission per fight. Costa has a great takedown defence, however.

Vettori also has better cardio and looks fight ready, whereas Costa’s pre-fight troubles hint that his head may not be in the right place. If Vettori can weather the early storm, he should be able to wear Costa down, and bounce back into the win column with a big win.

Who do you think will win the light heavyweight fight between Paulo Costa and Marvin Vettori at UFC Vegas 41?