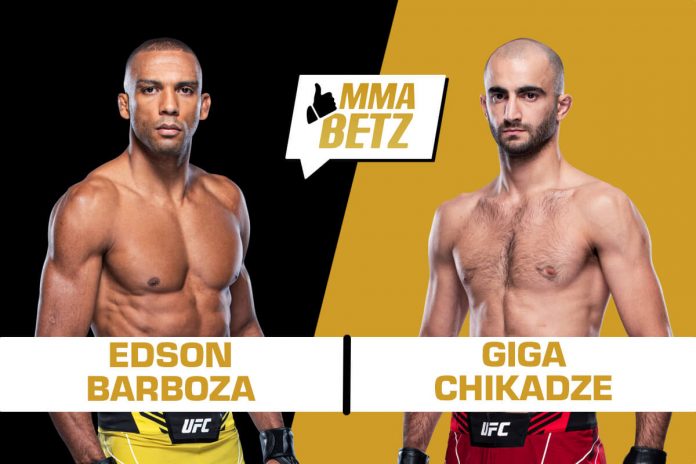 UFC Vegas 35 goes down this weekend at the UFC APEX in Las Vegas. In the main event, Edson Barboza takes on Giga Chikadze in a high-anticipated featherweight bout.

Barboza is currently riding a two-fight win streak, with his most recent win coming against Shane Burgos by third round knockout at UFC 262. Chikadze is undefeated in his six fights in the UFC and most recently finished Cub Swanson early in the first round at UFC Vegas 25.

Barboza and Chikadze are two of the most lethal strikers in the UFC featherweight division, and both have very similar fighting styles. Both fighters have world class kickboxing ability, but there are a few reasons to lean towards the Brazilian, who has a lot more experience, is faster and more dynamic compared to the Georgian. And also does a great job of controlling the pace of the fight. Barboza will also have the edge in the clinch, an area where Chikadze tends to struggle. Chikadze relies more on his counter striking ability and has a variety of strikes in his arsenal, including his vicious liver kicks, which he calls his ‘secret weapon’.

Given their fighting styles, we shouldn’t expect a lot of grappling action at UFC Vegas 35, but Barboza has a slight edge in the grappling department. He’s also got an excellent takedown defence.

All in all, it’s going to be an exciting striking contest, with Barboza using his experience, speed and volume to earn the stoppage win at UFC Vegas 35.

Who do you think wins the UFC Vegas 35 main event between Edson Barboza and Giga Chikadze?