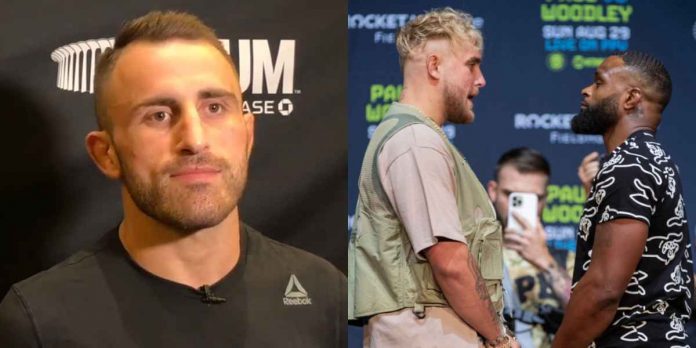 Alex Volkanovski has given his thoughts on the boxing match between Jake Paul and former UFC welterweight champion Tyron Woodley, set to take place on Sunday in Cleveland, Ohio.

Paul is a 3-0 professional boxer, with wins over fellow YouTuber AnEsonGib, NBA star Nate Robinson and former ONE Championship and Bellator titleholder Ben Askren, whereas Woodley will make his pro boxing debut on fight night.

Speaking to LowKickMMA (as transcribed by BJPenn.com), Volkanovski said that he’s backing Woodley to get the stoppage in the later rounds.

“This is a big step up for Jake Paul,” Volkanovski said. “Jake Paul can box, you have to give him credit, he can decently box. But at the same time, do I think that he’s going to knock out Tyron Woodley? I don’t think so, and Tyron Woodley’s a dangerous guy. If he’s fit, if Tyron Woodley’s fit and it goes into the later rounds, Tyron can definitely get the finish in the later rounds.

Volkanovski is scheduled to defend his featherweight title against Brian Ortega at UFC 266 on September 25th.

Do you agree with Alex Volkanovski that Tyron Woodley will get the job done against Jake Paul?