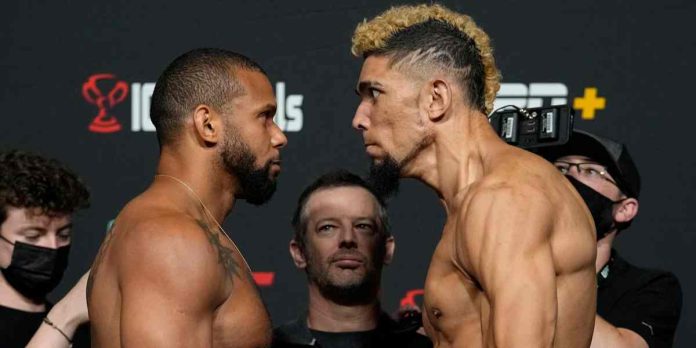 UFC Vegas 38 went down on Saturday night at the UFC APEX in Las Vegas. In the main event, Thiago Santos defeated Johnny Walker by unanimous decision in what was a lacklustre fight. The matchup, which guaranteed fireworks on paper, failed to live up to its expectations on fight night, as both men engaged in a tactical battle, trying to outpoint one another. ‘Marreta’ managed to do just enough to snap his three-fight losing skid.

The co-main event between Kevin Holland and Kyle Daukaus ended in an unfortunate manner as the fight was ruled a no-contest due to an accidental headbutt, which momentarily knocked ‘The Trail Blazer’ unconscious, allowing his opponent to take his back and choke him out. However, referee Dan Miragliotta overturned the original decision after going through the replay.

Kevin Holland vs Kyle Daukaus – No contest as a result of Holland receiving an accidental headbutt in the first round (3:43)