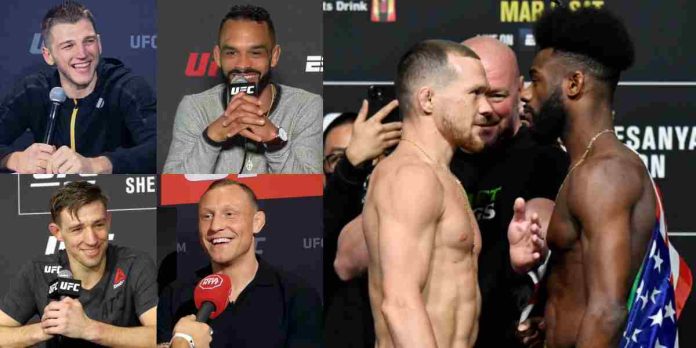 The long-awaited bantamweight title rematch between Aljamain Sterling and Petr Yan takes place this weekend in the UFC 273 co-main event.

Yan was cruising to victory in their first encounter in March of last year at UFC 259, before he struck Sterling with an illegal knee, costing him his belt. The two were scheduled to run it back a few months later in October at UFC 267, but ‘Funk Master’ withdrew from the contest due to lingering neck issues following surgery.

The UFC then booked a short notice interim title fight between Yan and Cory Sandhagen, which the Russian won by unanimous decision.

The odds are heavily in favour of Yan ahead of the rematch, with the vast majority believing that he’ll reclaim his title. Speaking to James Lynch, Dan Hooker, Drew Dober, Erick Gonzalez, Kyle Daukaus, Steven Peterson, Rob Font and Jack Hermansson revealed their picks.

Drew Dober: “I’ve got Petr Yan on that one. He looked really incredible in all of his fights except for Cory Sandhagen (laughs).”

Erick Gonzalez: “I think Yan’s got bad blood for him. He’s smart and he’s a beast, man. Aljamain has a lot to prove considering how it went out in the last fight. I got Yan on this one, man. I am an Aljamain fan, but I don’t see him beating Yan right now.”

Kyle Daukaus: “I am a big fan of Yan. I thought he dominated the first fight obviously. He just made a stupid mistake.”

Steven Peterson: “Petr Yan. I mean, up and down, striking, changing levels, wrestling, I’m going to go with Petr Yan all around.”

Rob Font: “I’m going to go with Petr Yan. I think he stops him this time.”

Jack Hermansson: “It’s going to be Petr Yan. I feel like even though it went the way it went in the first round, I think the rematch is going to go Petr Yan’s way.”

Who do you think will win the bantamweight title unification bout between Aljamain Sterling and Petr Yan at UFC 273?