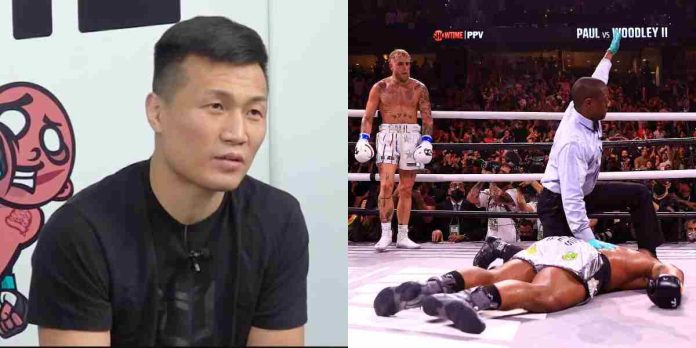 ‘The Korean Zombie’ has given his thoughts on Tyron Woodley’s knockout loss to Jake Paul in their boxing rematch last month.

Woodley fought Paul for the first time in August, where he lost by split decision. He accepted the rematch on short notice after Tommy Fury, who was originally scheduled to fight the YouTube sensation, had to pull out due to a bacterial chest infection and a broken rib. There wasn’t a whole lot of action in the rematch, but ‘The Problem Child’ broke the internet by landing a vicious right hand on ‘T-Wood’, who fell face-first onto the canvas in the final minute of the sixth round.

‘The Korean Zombie’ On Paul vs Woodley

Speaking on his YouTube channel, ‘The Korean Zombie’ explained why he’s upset that Woodley was knocked out by Paul.

“Woodley lost by KO. I’m so mad… so mad,” ‘The Korean Zombie’ said. “Some people might not understand. ‘Why’s he mad? He’s not the one who lost.’ He is a fellow UFC fighter and was even a champion once. How could a guy like him get knocked out by a YouTuber? That’s really unfortunate. It’s upsetting. Paul’s original opponent was Tommy Fury, and Woodley only stepped in on a two-week notice, so I think that could be the only excuse for his loss. I think short notices are more disadvantageous in boxing than in MMA.”

Chan Sung Jung is coming off a unanimous decision win over Dan Ige in his most recent fight at UFC Vegas 29 and will challenge UFC featherweight champion Alex Volkanovski at UFC 273 on April 9th. Max Holloway was originally scheduled to fight for the title but had to pull out due to injury.

‘The Korean Zombie’ fought for the title for the first time in 2013 at UFC 163, where he was finished in the fourth round by Jose Aldo.

Will ‘The Korean Zombie’ capture the featherweight gold at UFC 273?