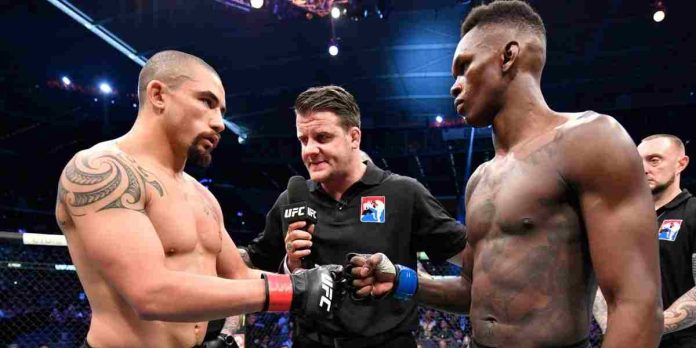 Robert Whittaker believes he is the most dangerous fighter in the UFC middleweight division.

After losing to Adesanya by decision in their title rematch at UFC 271, Whittaker bounced back to winning ways with a dominant win over Marvin Vettori at UFC Paris. The Aussie will be keeping a close eye on the middleweight title fight between ‘The Last Stylebender’ and his arch-rival Alex Pereira at UFC 281.

Although Adesanya has dismissed the idea of a third fight with Whittaker, the latter believes a trilogy is inevitable.

With or without gold however, Whittaker told Ariel Helwani in a recent appearance on MMA Fighting’s The MMA Hour that he believes he’s the most dangerous man in the division.

“I know that I have one more shot against Izzy [Adesanya] if that’s what it is or if he gets dethroned I definitely have another shot at gold,” Whittaker said. “I think getting that third fight with Israel will be a deciding point for that or whoever else it is. Definitely [there will be a third fight with Adesanya]. It would be silly not to because I’m just running through everybody else. Especially the way the second fight left off, I’d have to have come the closest since he’s gotten the title to taking it back off him.

“I’m the most dangerous man in the division. Izzy, he’s the champion of the division, he beat me the last fight as well. He’s a great fighter. But I’m the most dangerous man. I can beat anyone in the division. That last fight against Israel I got within a hair’s breadth of taking everything away from him. Just the fights that I’ve been in and the opponents that I’ve had, I’m not just beating them. I’m flogging them. There’s a difference in that.”