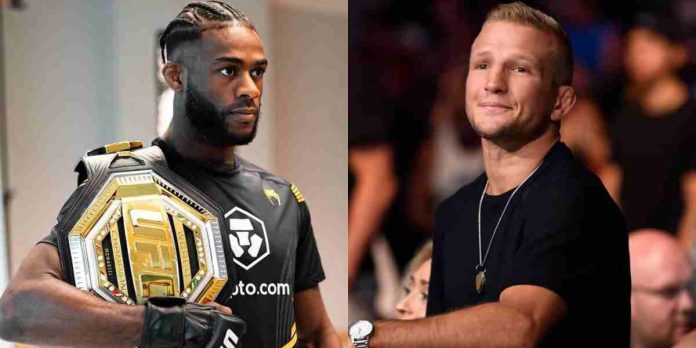 Aljamain Sterling believes TJ Dillashaw has cheated throughout his career, during which he captured the UFC bantamweight title twice.

Dillashaw is looking to make history by becoming a three-time bantamweight champion when he faces Sterling in the co-main event at UFC 280 next month. ‘Killashaw’ was widely regarded as one of the greatest 135-pound fighters of all time before he failed a drug test in 2019, and was subsequently handed a two-year suspension. He made a successful return to the Octagon at UFC Vegas 32, where he defeated Cory Sandhagen by a controversial split decision.

The doping controversy has tainted Dillashaw’s legacy, but he claims that he only used the banned substance EPO once, to cut down to the 125-pound limit to face Henry Cejudo for the flyweight title at UFC Brooklyn, where he was stopped in a little over half a minute.

While Dillashaw claims he has only cheated once in his career, Sterling begs to differ. Speaking to the UFC (as transcribed by MMA Junkie), Sterling accused the former champ of cheating throughout his career.

“The new ‘CEO of EPO’ is Mr. TJ ‘Dilla-roids.’ I think he’s a tough dude,” Sterling said. “I don’t think he’s done anything in his career fairly. I really do think he’s cheated for just about all of his career. I mean, his teammates are whistleblowers when he was over there teaching people to do what he was doing. I respect his skillset, and I respect what you’ve done in the sport, but guess what? The backpack is coming, and I’m coming for that ass.”

Who do you think will win the bantamweight title fight between Aljamain Sterling and TJ Dillashaw at UFC 280?