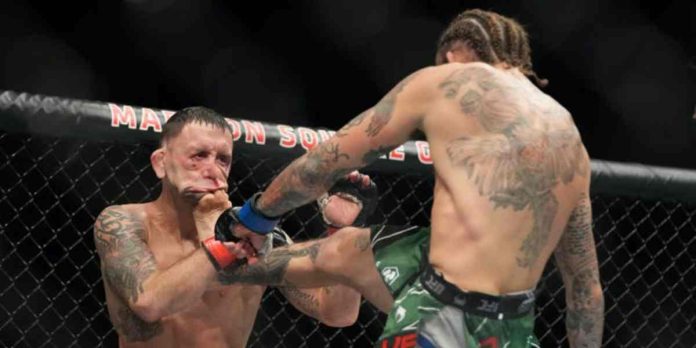 Marlon Vera has explained why he flipped off Frankie Edgar during their main card bout at UFC 268 this past weekend.

Vera brutally knocked out Edgar in the third round of their bantamweight clash at UFC 268 to earn the biggest win of his career, but raised many eyebrows by showing ‘The Answer’ the middle finger at the end of the second round. Many fans have criticised ‘Chito’ for disrespecting the former lightweight champion.

Flipping Off At Edgar

During the UFC 268 post-fight press conference (as transcribed by MMA Junkie), Vera explained why he flipped off Edgar.

“It’s just mind games,” Vera said. “We made eye contact. He gave me like a tough look, so I’m like, ‘F*** you, what?’ At the end of the day, he’s a legend. I wish him the best. He’s a fighter. A lot of people believe we should be hugging each other and bowing. Like, no. We’re fighting for money. We’re not fighting for fun or a medal. We fight to feed our families. I fight to become a world champion.”

Vera also said that winning in a spectacular fashion at an iconic venue like the Madison Square Garden was a dream come true for him.

“It’s a dream come true fighting in MSG, winning in there [in] the fight before the co-main event,” Vera said. “What else can I ask [for]? Like for me, I’m grateful for the moment. I’m happy. I’m enjoying it. I’m pretty excited about the future. I’m going to get back to work soon and keep it up. This is already going. Now, I’ve got to create new memories.”

Who do you think Marlon Vera and Frankie Edgar should fight next?