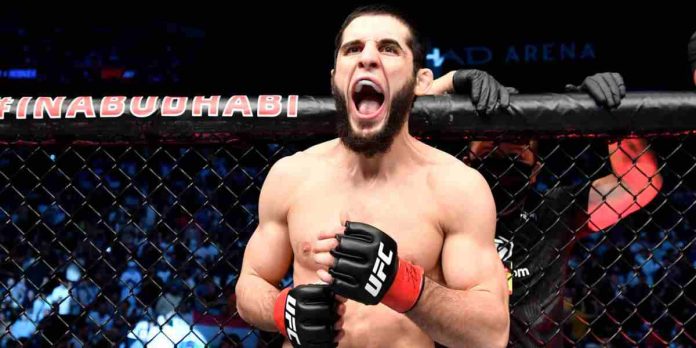 Islam Makhachev has revealed three names who refused to step in on short notice to fight him at UFC Vegas 49, after Beneil Dariush pulled out due to injury.

Makhachev was scheduled to face Dariush in a potential lightweight title eliminator at UFC Vegas 49, but the latter had to pull out due to injury, allowing Bobby Green to have an opportunity of a lifetime. ‘King’ wasn’t the promotion’s first choice, however, and only stepped in on 10 days’ notice after three notable lightweights declined the offer.

Islam Makhachev On The Three Fighters Turning Him Down

During the UFC Vegas 49 media day (as transcribed by BJPenn.com), Makhachev revealed that Rafael dos Anjos, Tony Ferguson and Gregor Gillespie turned him down, although he completely understands why they made that choice.

“RDA, Tony, and Gillespie, they all said no, Ali [Abelaziz] told me this,” Makhachev said. “I don’t want to say they are scared or something because this one week before the fight, but I always have the same problem (of) finding someone. I have to respect Green because he’s making this happen and he wants to make money and I just want to help him a little bit.”

Dos Anjos is already booked to face Rafael Fiziev next month at UFC 272, while Ferguson is linked to a fight against Michael Chandler. As for Gillespie, he doesn’t have a fight scheduled or in the works, but it’s not surprising to see him and the others turn down a short notice fight against one of the toughest lightweights in Makhachev, who is currently riding a nine fight winning streak and is coming off a first round submission victory over Dan Hooker at UFC 267.

Will Islam Makhachev continue his winning ways against Bobby Green at UFC Vegas 49?