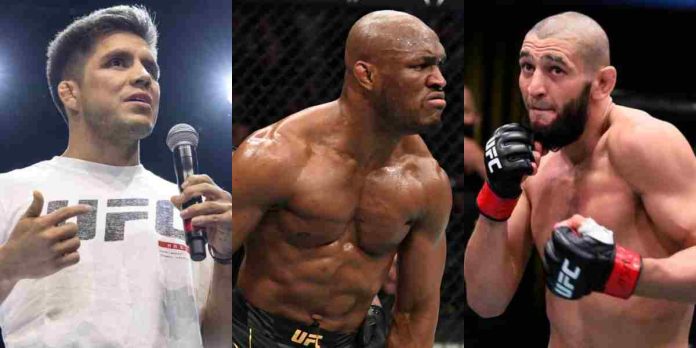 Henry Cejudo has given his thoughts on a potential UFC welterweight title fight between Kamaru Usman and Khamzat Chimaev.

Chimaev passed the biggest test of his career in a barnburner against Gilbert Burns this past weekend at UFC 273 and wants to fight Usman for the title next, although Dana White believes a fight between ‘Borz’ and Colby Covington makes more sense considering the fact that Leon Edwards is the next in line to fight for the belt.

The Chechen-Swede’s willingness to fearlessly trade blows with the Brazilian was commended by many in the MMA community, but Cejudo believes his aggressive approach would backfire against Usman, he said while speaking on his Triple C and Schmo Show.

“That was the right call but if Chimaev goes out there and fights ‘The Nigerian Nightmare’ like that, he’s in big trouble, man. We saw him kind of become human here,” Cejudo said. “Chimaev needed this humble pie. He thinks he can walk on water a little too much, and that’s probably our fault, because we kind of put him on a pedestal when he really hasn’t proven anything. Once he fought a top contender a lot of people gave that fight to Gilbert Burns. He could have lost [the fight].

“I almost feel like he’s too big for 170. He’s too big. Yeah, you can make the weight, but you’re barely able to make the weight where it really affects you. I think Chimaev at 185 pounds is a more dangerous Chimaev than 170 pounds.”