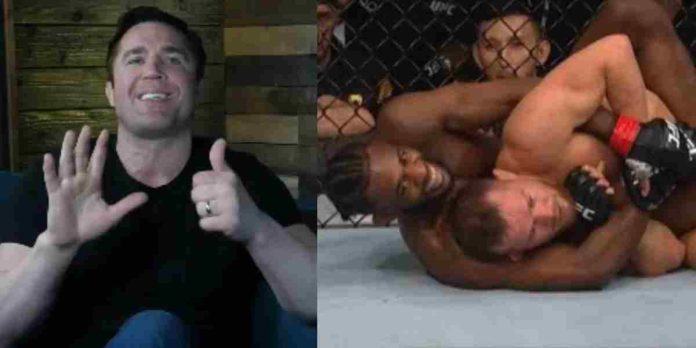 Chael Sonnen believes Aljamain Sterling could have won all five rounds of his title unifier against Petr Yan at UFC 273, but he decided to take his foot off the gas after securing the first three.

Sterling relied on his grappling early and held off a late rally by Yan in the championship rounds to defend his bantamweight title by split decision. The American showed significant improvement compared to his first fight against the Russian, where he won by disqualification after absorbing an illegal knee.

The first round was razor close, with two judges scoring it in favour of Sterling, who dominated Yan in the second and third round, taking his back and controlling him on the mat. Although he failed to secure a submission. ‘No Mercy’ was much busier in the championship rounds however, with higher output and greater control time.

Chael Sonnen On Sterling vs Yan 2

Speaking on his YouTube channel (as transcribed by BJPenn.com), Sonnen said that Sterling took his foot off the gas after winning the first three rounds and speculated that the champ wasn’t at his best.

“I’m not certain that anything is going to be harder than what he just did, and I’m not sure he was at his best,” Sonnen said. “I’m really not. I think you’d have a tough time convincing me that Sterling was at his best when we all agree he gave two rounds away, of a five-round fight. If he wanted to win all five, it looked like he could’ve. That’s kind of what it looked like, as a matter of fact. Yan even did everything right. Yan was fast, he was hungry, Yan gave up on absolutely zero positions. He changed strategy from round one to round four, he made adjustments. Sterling was just that damn good.”