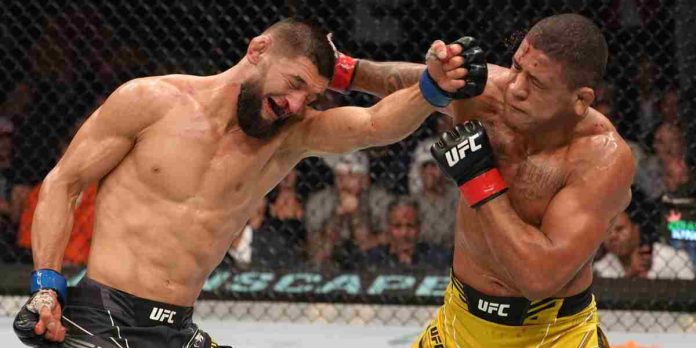 Gilbert Burns agrees with Khabib Nurmagomedov that Khamzat Chimaev should surround himself with good mentors.

Chimaev most recently competed at UFC 279, where he was scheduled to fight Nate Diaz in the main event, but after missing the welterweight limit by 7.5 pounds, he was demoted to the co-main event against Kevin Holland, who the Chechen-Swede defeated comfortably by first round submission. Prior to his weight miss, ‘Borz’ had forced the UFC to cancel the pre-fight press conference by causing a backstage brawl.

Khabib wasn’t impressed with Chimaev, and said that he needed more good people, particularly Muslims, around him. Speaking to MMA Junkie, Burns said that he agrees with the former UFC lightweight champion.

“It doesn’t matter how you start, it matters how you finish,” Burns said. “It don’t matter if that guy starts so big, so impressive. It matters how you finish, you know? … I don’t know, the fans might like all the drama; the not making weight, canceling your press conference, a lot of things. It’s hard to feel bad for this guy that’s making a lot of mistakes on just the beginning of his career.

Do you agree with Gilbert Burns and Khabib Nurmagomedov?