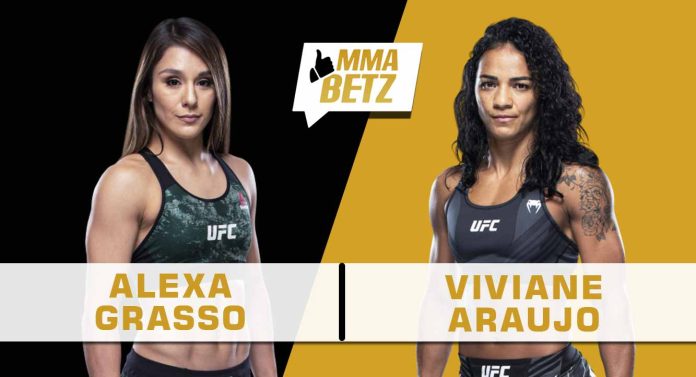 UFC Vegas 62 goes down next weekend at the UFC APEX in Las Vegas. In the main event, Alexa Grasso takes on Viviane Araujo in a crucial flyweight matchup.

Grasso is currently riding a three fight winning streak with her most recent win coming against Joanne Wood by first round submission at UFC Columbus. Whereas Araujo returned to winning ways in her most recent fight, in which she beat Andrea Lee by unanimous decision at UFC Vegas 54.

Grasso is an excellent boxer with strong technical striking ability and fast hands. She’s also consistently improving her ground game, which will come in handy against a grappler of Araujo’s calibre. The Brazilian has good hands, but with the Mexican being the far better striker, she will try to take the fight to the mat and finish it as early as she can, because a longer fight favours her opponent. Grasso has a decent takedown defence and she’s also very sneaky on the mat, however.

As well as having a technical edge in striking, Grasso has the edge statistically as she lands close to five significant strikes per minute on average and absorbs less than four. Araujo lands close to four and a half significant strikes per minute on average, whereas she absorbs over five. Araujo has an excellent takedown average (2.25 per 15 minutes) and accuracy. She isn’t the best when it comes to controlling her opponents on the mat, however.

Araujo will have success with her grappling early on but expect Grasso to hold her own against her opponent’s grappling threat and out-strike her on the feet.

Who do you think will win the flyweight main event between Alexa Grasso and Viviane Araujo at UFC Vegas 62?