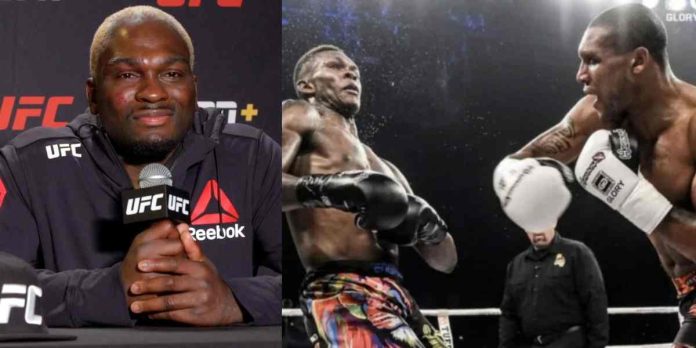 Derek Brunson has given his thoughts on how he thinks a potential fight between UFC middleweight champion Israel Adesanya and Alex Pereira would play out.

Pereira holds two wins over Adesanya in kickboxing and is now eyeing a third one in MMA, with UFC gold on the line. He’s 3-0 in the promotion thus far, with his most recent win coming against Sean Strickland by first round knockout at UFC 276. Whereas ‘The Last Stylebender’ made his fifth successful title defence by scoring a comfortable unanimous decision victory against Jared Cannonier in the main event.

It is highly likely that Adesanya will make his next title defence against his arch-nemesis. The Nigerian-New Zealander has opened as a betting favourite against the Brazilian, but many believe the latter is the man to beat the reigning champ.

Speaking to Helen Yee (as transcribed by BJPenn.com), Brunson said that Pereira has the style to hand Adesanya his first loss at middleweight.

“If I was betting, I’m a betting guy, I’m gonna bet on Alex,” Brunson said. “Not because he beat him, well yeah, because he beat him twice, but Izzy was winning the kickboxing match that he got knocked out in by Alex is from what I heard. Alex, you know, he stays in there and he looks to like, trade. He’s not moving back a lot. So, you got five rounds to find your one punch. So maybe give it to Alex, I don’t know or maybe if I had to bet I’ll go Alex.”

Derek Brunson is coming off a brutal knockout loss to Cannonier at UFC 271, and has stated that his next fight will be his last in MMA.

Israel Adesanya or Alex Pereira, who would you bet on?